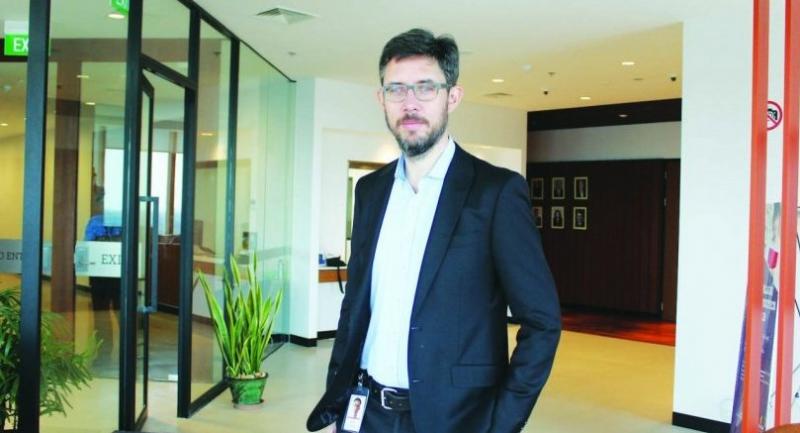 Though Myanmar has yet to receive investment from Australia in fiscal year 201718, the nation’s improved business regulations should arouse Australian investors’ interest, according to a diplomat.

Nick Cumpston, economic counsellor at the Australian Embassy, said in an exclusive interview that the Union Parliament’s recent passage of the new Myanmar Companies Law could spur Australian investment and bilateral trade.
“Myanmar is not an easy country to invest in, but we have seen positive developments these years. So, we do encourage Australian businesses to do business here,” he said.
According to the Directorate of Investment and Company Administration, Australian investment accounted for less than one per cent of Myanmar’s total foreign direct investment (FDI) inflow, with 18 firms approved to invest US$145.8 million (198.7 trillion kyat) in the country.
Yet, Cumpston said that Woodside alone has invested half a billion dollars in gas exploration, and many other Australian firms have also invested through holding companies in Singapore.
He foresees larger investment in offshore gas exploration and the entry of small Australian companies in financial services and education sectors in the near future.
“We are hoping that bilateral trade and investment will continue to increase. You can never forecast the future 100 per cent. But we expect the growth to continue,” he said.
Cumpston said the recent conflicts in Rakhine State did not have any negative impact on investors’ optimism. He added Australian companies were aware of the need for longterm investment.
He also welcomed the merger of two Australian chambers formerly registered in Myanmar, as it would ensure unified voices for Australian companies in discussions with other business organisations.
“I do not think it will make enormous difference [in bringing Australian investments] but it will definitely make a positive contribution,” he said.
According to the diplomat, supporting Myanmar’s economic growth by helping improve business regulations is one of the three main areas in Australia’s development assistance.
Business regulations to be prioritised include rural development, improving access to microfinance, strengthening regulations, sharing technology and implementing best practices, he said.
Cumpston seemed happy to support the enactment of the new investment law and rules, modification of the centuryold Burma Companies Act and empowerment of women in businesses.
“In terms of total development assistance, we provided over $75 million last year. That increased very much in the last five years. We expect the funding will be similar for the upcoming years,” he said.
Supporting education and promoting peace and stability throughout the country are the other key areas in Australia’s development assistance. Australia has planned to provide more funding to government schools across the country to improve teacher training. It also provides around 50 scholarships for Myanmar students every year.
Additionally, support for the peace process, democratic elections, and leadership would be increased along with humanitarian assistance to people in need, particularly from conflict-affected and disasterhit areas.
“Myanmar’s education system is lacking behind a lot of countries in Asean. So, we are working with the government to provide more funding for training. But we do not provide military assistance,” he said.
He said Australia helped promote human rights in conflict areas including northern Shan and Kachin states where things had improved a lot.
Australia has been cooperating with development lenders such as the World Bank, Asia Development Bank and Asia Infrastructure Development Bank to implement development projects in Myanmar. Two projects were recently approved to improve electricity supply and to renovate the YangonMandalay highway.
He expects to see high level visits between the two countries thanks to closer governmenttogovernment cooperation and peopletopeople contact. Several Myanmar officials have visited Australia, and more Australian tourists came to Myanmar this year, he said.
He also foresees cultural exchange programmes next year, as a number of Australian universities have partnered with various universities in Myanmar including Yangon University, Yezin Agricultural University, University of Medicine, as well as the National Museum.