Every year, the first monsoon rains awaken Bangkokians’ appetite for hot soup as a belly-warming defence against the cold wind. Many head straight for Tai Tong, opposite Robinson Bangrak department store, a culinary landmark that has been serving prized Chinese specialities for more than half a century in the neighbourhood.

Phaisan “Hei Hui” Asawathanaphong said his family began selling their now-famous Chinese red-stock soup from a cart in the 1960s, during the dictatorship of Field Marshal Thanom Kittikachorn. As the number of customers swelled, the business grew into a small restaurant, earning his father fame and visits from well-known politicians and historic figures.

“Tai Tong means ‘mainland’. In the past, we mostly served Chinese immigrants who tucked into our food every day on the restaurant’s first floor and second floor,” said Phaisan.

The secret to the red stock’s authentic and addictive flavour lies in high-quality ingredients. Phaisan has sourced sea cucumber from Chile, abalone from Mexico, and noodles from Hong Kong, but refuses to use any MSG or other chemicals. The broth is boiled with the finest quality whole chickens, then simmered to create a clear but rich stock which is used in various dishes, including fish maw soup (with crab meat and shiitake mushrooms) for Bt300 to Bt500, sea cucumber in red gravy priced at Bt1,000-Bt1,500, and mutton in red gravy (Bt600), or abalone with red sauce (Bt1,000-Bt1,500).

However, the restaurant also serves shark fin so may not be to everyone’s taste.

“For soup we use good-quality bird's nest plucked from caves in Trang and Phuket. In the past, we sold bird's nest soup for Bt2- Bt3 per cup, or Bt4.50 if egg was added,” said Phaisan.

These days, the same dish costs customers Bt200-Bt500 per cup but there is no shortage of orders. “We order our crab meat from Surat Thani, but we wait for about three months until their claws are very big,” he added, while showing off his cooking skills. 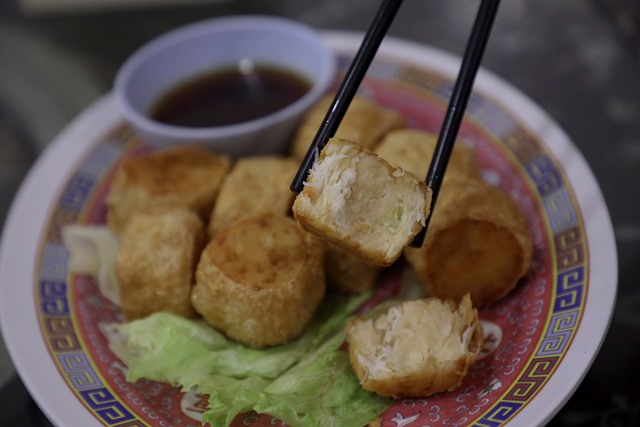 Another speciality at Tai Tong is the Hoi Jo or deep-fried crabmeat rolls, priced at Bt60 per piece. The flavour is rare and prized by customers since the rolls are 100-per-cent crab meat, untainted by the pork, lard or water chestnuts added by other restaurants.

Tai Tong’s owner has been steadfast in refusing to franchise the business, preferring to stay true to his authentic recipes. That authenticity has won him plenty of admirers back in China.

“Some have even tried to hire me to cook in Beijing,” said Phaisan with a grin, before returning to the hot stove to satisfy his small army of loyal Bangkok customers.