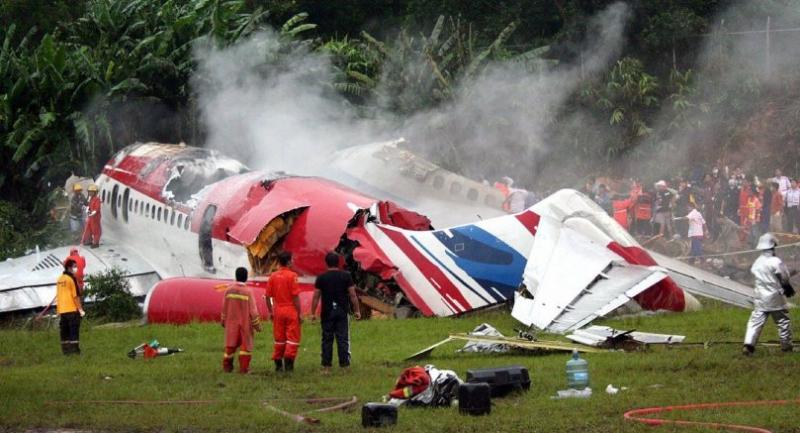 (FILES) In this file photo taken on September 17, 2007 rescue workers stand next to the wreckage of Thai budget carrier One-To-Go MD-82 plane after it crashed at Phuket airport in Phuket island. // AFP PHOTO

Filed by the families of the nine French victims along with one survivor, the civil suit says the crash was an "accident waiting to happen".

It raises a string of allegations against the now-defunct airline, running from exhausted pilots to falsified flight logs.

The crash happened on the resort island of Phuket on September 16, 2007, when a One-Two-GO passenger jet carrying 123 passengers and seven crew skidded off the runway and burst into flames while trying to land in driving rain and heavy winds.

The victims' families have accused the airline of trying to cover up a series of failings which led to the crash, with Monday's case levelling a manslaughter charge against One-Two-GO president Udom Tantiprasongchai.

At the time, he admitted the airline had to accept partial responsibility for what was Thailand's worst air disaster in a decade.

But despite an international warrant for his arrest, he has never been detained and has never responded to a judicial summons, meaning he will likely be tried in absentia.

Among the dead were 33 Thai nationals and 57 foreigners, mainly tourists from Britain, Israel and France.

"It's not about money," said Gerard Bembaron, one of the French plaintiffs who lost his brother in the crash.

"We want to return to this forgotten accident so that the families can be recognised as victims. It was not inevitable, it was an accident waiting to happen given the way this company functioned." (FILES) In this file photo taken on September 17, 2007 workers and officials inspect the site of the One-Two-Go budget airline's MD-82 passenger jet on the Thai resort island of Phuket, a day after the plane crashed as it tried to land in poor weather. - A trial opens on June 24, 2019 in Paris for ex-head of Thai low-cost airline One-Two-Go over deadly 2007 crash in Phuket. // AFP PHOTO

An investigation by the Civil Aviation Authority of Thailand concluded the plane crashed as a result of human error as the pilot and his co-pilot sought to land in bad weather.

But it also found the pilots had exceeded their weekly number of flight hours and were suffering from accumulated stress due to tiredness and lack of rest, which meant that their responses were impaired in a critical situation.

As the investigation got under way, the airline submitted documents falsifying the number of hours the pilots had flown, to make it look as if they were within the correct limits, a source close to the case said.

Twelve years on, the French inquiry has revealed numerous failings in the recruitment, training and working habits of the pilots as well as in the maintenance of the fleet.

The extended flying hours were commonplace, with pilots earning cash bonuses, a former pilot told investigators, alluding to a "criminal business culture" that included "serious breaches of the most basic security norms".

One-Two-GO and its parent company Orient Thai have both ceased to operate.