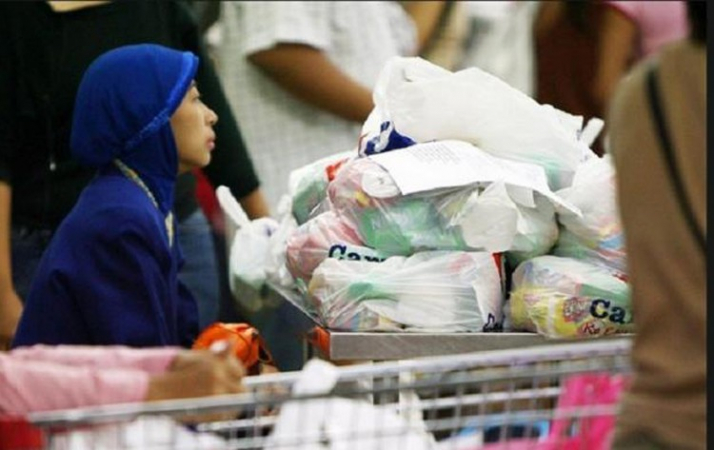 A customer of a supermarket pushes a trolley full of goods in plastic bags. (Harian Kompas/Yuniadhi Agung)

The Jakgrosir Kramat Jati wholesale market in East Jakarta has gone on a "single-use plastic bag diet" by not providing them to customers to help reduce plastic waste in the city.

“This is a step to reduce plastic waste conducted by Pasar Jaya,” the spokeswoman of city-owned market operator Pasar Jaya Amanda Dinajar said on Monday as reported by Antara.

Amanda said the Pasar Jaya has started the promotion to cut the single-use plastic bag to customers in accordance with green campaign launched by the government. The company had also urged markets under its wing to promote the plastic bag diet.

The Jakgrosir wholesale market, which sells affordable staple food, has started not to provide kresek (single-use plastic bags) to customers.

However, despite the efforts, there are still customers of Jakgrosir using plastic bags for their shop. There are vendors selling plastic bags cheaply at the market’s entrance gate.

Shopper Sukamti, 45, from Kampung Makasar in East Jakarta, said that she used the plastic bags given to her by the vendors of the staple foods. However, she said that she tried to reuse it as many times as she can to reduce her reliance on plastic. (eyc)