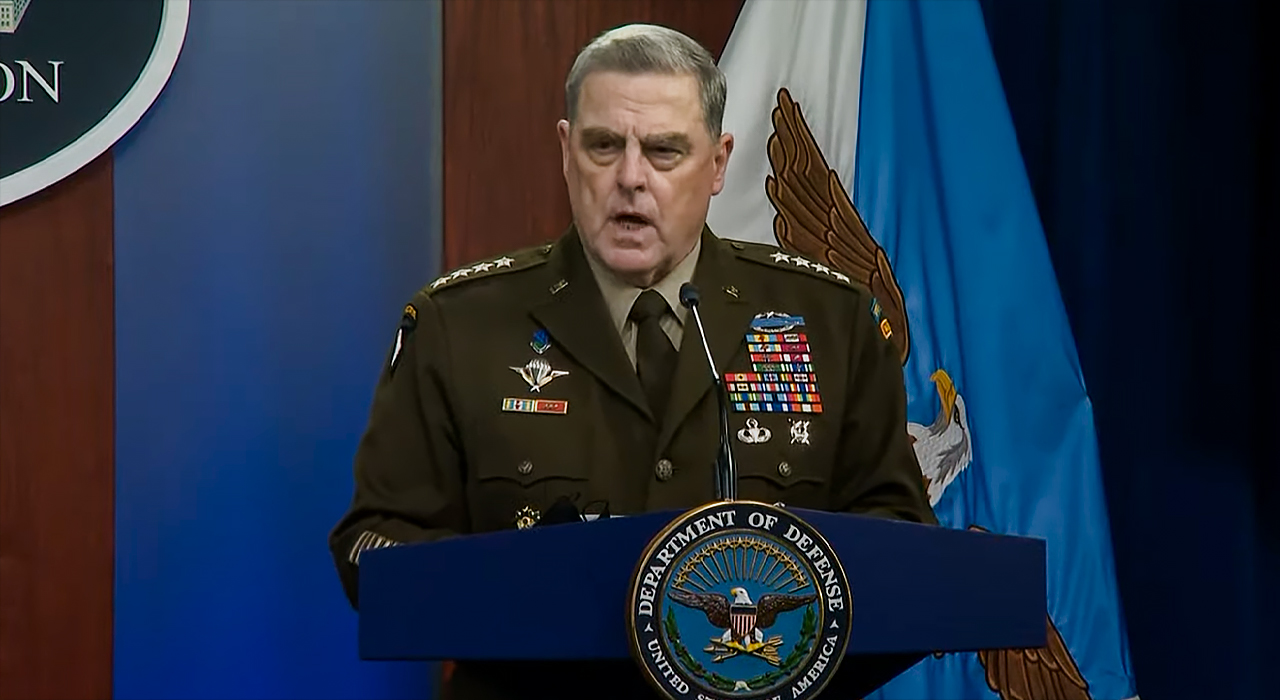 U.S. could work with Taliban against terrorists, Pentagon says

The top U.S. military official said it is "possible" the United States will coordinate with the Taliban in the fight against the Islamic State, although he declined to make predictions about potential collaboration with Afghanistans new rulers, who could announce a new government as early as Thursday.

"We don't know what the future of the Taliban is, but I can tell you from personal experience that this is a ruthless group from the past, and whether or not they change remains to be seen," Gen. Mark A. Milley, chairman of the Joint Chiefs of Staff, told reporters Wednesday. "In war, you do what you must," he added, even if it is "not what you necessarily want to do."

American commanders worked with the Taliban to facilitate the evacuation of more than 124,000 people from Afghanistan in recent weeks. Both the United States and the Taliban share a common threat in the Islamic State, which was responsible for an attack outside Kabul airport last week that killed 13 U.S. service members and more than 170 civilians.

Britain will have to engage with the Islamist militants who now control Afghanistan even if it does not intend to recognize the Taliban for now, its top diplomat said on Thursday.

"We need to adjust to the new reality," British Foreign Secretary Dominic Raab told reporters in a news conference with his counterpart in Qatar. "We will not be recognizing the Taliban in the foreseeable future but there is an important scope for engagement and dialogue."

"I think there are some early tests for the Taliban," he added. One of those tests, he said, will be the Taliban's assurance that it will allow foreigners and Afghans wishing to leave safe passage out of the country, now that the last U.S. troops who held Kabul airport have left.

More than 120,000 people boarded U.S., British and other evacuation flights out of the city after the Taliban's swift advance. But many more awaiting rescue remain - including Afghans who guarded the U.K. embassy and a few hundred British nationals.

The Biden administration has faced criticism for the chaotic evacuation and withdrawal after nearly two decades of war in Afghanistan. So have British officials, chief among them Raab who was vacationing on a Greek island when the capital fell.

The British minister said on Thursday that governments needed to engage directly with the Taliban to make sure aid workers could still operate there to avoid "a humanitarian disaster," as well as to pressure the militants to stick to their promise that their rule will be less repressive this time around.

After meeting with the British diplomat, Qatar's foreign minister said the Gulf state was talking to the Taliban and Turkey about the reopening of Kabul airport, though it remained unclear when that would happen. "We will remain hopeful that we will be able to operate it as soon as possible."

In other developments, a former U.S. official, international soccer players, U.S. allies and a military veteran have joined forces to try to evacuate young female Afghan soccer players, their coaching staff and their families from Afghanistan.

The group of 133 Afghans, which includes infants, has been seeking to escape the country out of fear of Taliban persecution, according to the Associated Press. The Taliban has banned women from playing sports in the past, although the militants now insist that women's rights will be ensured within an Islamic framework. The players are between 14 and 16 years old.

The group has failed to escape Afghanistan at least five times, including when an Islamic State bombing attack outside Kabul's airport last week prevented the Afghans from boarding a plane, the AP reported. Now, they are moving from location to location, to avoid the Taliban. Their lack of passports or other documentation has hampered their efforts to leave the country.

Robert McCreary, a former White House official during the George W. Bush administration who is working to extract group, said he hopes to create a "protective bubble" around the Afghans. He said he has urged the Taliban to help them leave. Australia, France and Qatar have offered to help as well.

The Biden administration has pledged to persuade the Taliban to provide safe passage to stranded American citizens and vulnerable Afghans hoping to leave.

"The only thing that they had done wrong in the eyes of the Taliban . . . is the fact that they were born girls and . . . had the audacity to dream," said Nic McKinley, a CIA and Air Force veteran who is also involved.

Facebook helped a group of Afghan journalists - along with its employees - flee to Mexico before the last U.S. troops pulled out of Afghanistan this week.

The Afghans - 175 Facebook employees, activists, journalists and their families, including 75 children - landed in Mexico City on Tuesday, according to Mexico's Foreign Ministry.

"In the process of assisting Facebook employees and close partners leave Afghanistan, we joined an effort to help a group of journalists and their families who were in grave danger," a Facebook spokesman said Thursday. "The journalists have been welcomed in Mexico."

Facebook declined to give further details on the evacuation effort, citing security reasons.

Taliban militants driving American Humvees showcased a lineup of weapons they captured during their blitz across the country at a parade in Kandahar celebrating the withdrawal of U.S. troops.A helicopter with a black-and-white Taliban flag hanging from its side cruised over scores of supporters in the country's second biggest city. A man waved to them from the sky.

Fighters with heavy machine guns stood atop military vehicles left behind after 20 years of war. Dozens of men watched on both sides of the road, some saluting the militants as they passed by.

A fleet of armored SUVs drove in a single file on a highway outside Kandahar, in Agence France-Presse photos on Wednesday from Afghanistan's south, the Taliban's traditional heartland.

The parade comes after Taliban fighters entered a hangar at Kabul airport on Monday night, posing with helicopters minutes after the last U.S. troops took off from the tarmac.

In the weeks since their conquests, Taliban fighters have flaunted the millions of dollars worth of U.S. weaponry they captured, though experts say it's not clear if they can maintain and use equipment such as helicopters.

Celebratory gunfire erupted in the sky over the capital after the final aircraft left, ending a chaotic evacuation of more than 110,000 people.

In the days after the U.S. pullout, videos on social media showed Taliban fans carrying coffins wrapped in American, British and French flags at a mock funeral in the eastern city of Khost.

Large crowds were out in the streets for Wednesday's show of force in Kandahar province, where the Taliban formed in 1994 before later ruling the country for five years until 2001.

Now that they are back in power, the militants must contend with governing a country of 39 million facing a wave of displacement and cut off from key sources of funding.

Taliban fighters on Humvee vehicles parade along a road to celebrate after the United States pulled its troops out of Afghanistan, in Kandahar on Sept. 1, 2021.