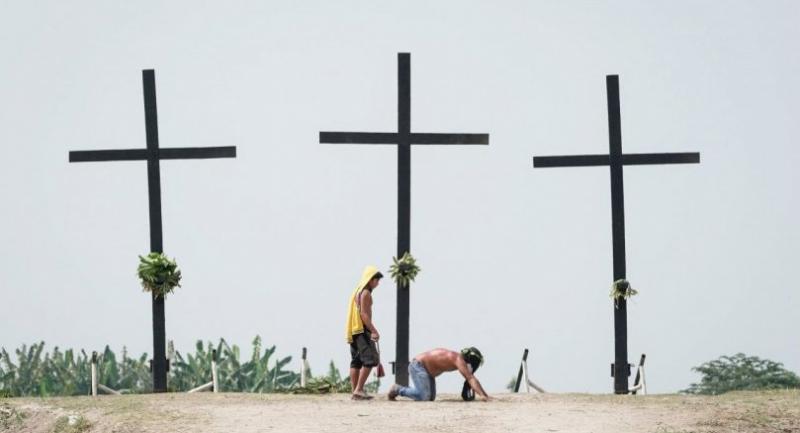 A flagellant is whipped on his back at a crucifixion site on Good Friday in San Pedro village, San Fernando, Pampanga, Philippines, 30 March 2018./EPA-EFE/MARK R. CRISTINO

Filipino zealots marked Good Friday with a bloody display of religious frenzy by having themselves nailed to crosses and whipping their backs raw in Asia's bastion of Catholicism.

Though frowned upon by the church, the gruesome re-enactments of Christ's final moments draw thousands of believers -- and tourists -- in a carnival-like atmosphere that is big business for locals.

In towns located north of Manila at least three people had eight-centimetre (three-inch) spikes driven through their palms and feet in hot, dry fields. More devotees were expected to take part later in the day.

At the same time, bare-chested men, some of whose faces were concealed by hoods, lashed their backs bloody, as selfie-snapping onlookers watched.

They left droplets of blood on cars, houses and even bottles of soda displayed on snack vendors' tables that lined the road.

"If one of my family members gets sick, this is what we do," said Norman Lapuot, 25, as he flogged himself with a bamboo-tipped whip. "I do this for my relatives."

Lapuot, who said it was his fourth time taking part in the ceremony, added that he believed the ritual bloodletting had helped his grandfather recover from a stroke.

While a majority of the Philippines' 80 million Catholics spend Good Friday at church or with family, participants undergo the gruesome spectacle to atone for sins or give thanks for divine intervention.

The mock crucifixions on Good Friday have been going on for decades despite official disapproval from the nation's dominant Catholic Church.

"The church never encourages self-flagellation, much less crucifixion," Roy Bellen, a spokesman for the Archdiocese of Manila, told AFP.

"All sacrifices being asked from Catholics during Lent and Holy Week should lead to actions that benefit the poor and the needy," he added.

Food stalls, cab drivers and even souvenir stands get a boost from the event which draws some 35,000 people every year to the area over the course of Good Friday.

Nearly 80 percent of people in the Philippines are Catholic, a legacy of the nation's 300 years of Spanish colonial rule that ended at the turn of the 20th century.