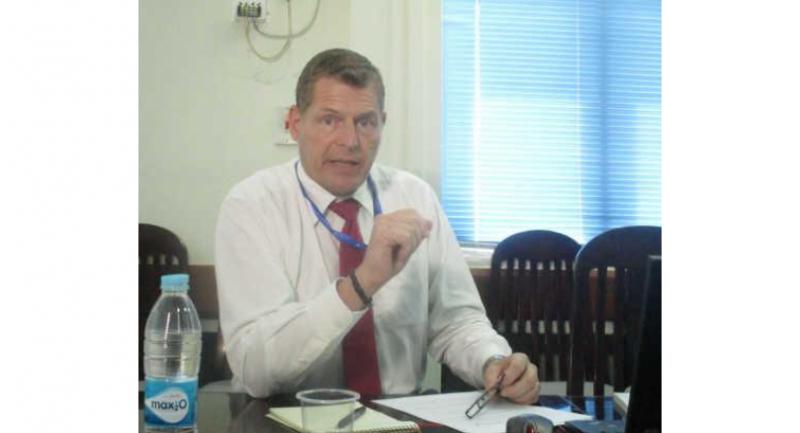 Myanmar set to graduate from least developed country status by 2025

ALTHOUGH Myanmar’s economic growth is slower than expected in the first year of the Aung San Suu Kyi-led government’s tenure, the nation is on the right track to graduate from the list of least developed countries by 2025, said Thomas Kring, economic adviser to United Nations Development Programme Myanmar.

Kring spoke at the launch of “The Least Developed Countries Report 2016: The Path to Graduation and Beyond – Making the Most of the Process”, which was conducted by the United Nations Conference on Trade and Development.
He said the report found that Myanmar was likely to achieve graduation from the list due to the momentum gained through broad-based development of productive capacities, diversification and structural economic transformation.
“We are very confident that Myanmar can graduate from the LDC status by 2025. Myanmar has already fulfilled the criteria for the human assets index, and is improving according to the economic vulnerability index,” he said.
“If you look at the economic vulnerability, the components of that index depend on how much agriculture products can be exported, how vulnerable agricultural production is and the components of manufacturing. Myanmar is gradually improving its capability to extend large impacts on agricultural production and manufacturing.”
Despite the positive assessment, Kring is not satisfied with Myanmar’s GNI (gross national income) per capita index. And while he said that graduation from the list would be a significant milestone for Myanmar, it was not the end result.
“While the graduation itself is a milestone, it is not the end, but a continued process. It is only a first step toward long-term development,” he said.
According to the report, graduation from LDC status is the sign of a maturing economy and successful development strategies. It is also a sign that the country will have the resources and capacity to reach the sustainable development goals (SDGs) by 2030.
Myanmar is one of the 48 countries in the least-developed category. The report states that many LDCs are stuck in a poverty trap, a vicious circle in which poverty leads to poor nutrition and health, and a lack of education, undermining productivity and investment. This blocks much-needed sustainable development to reduce poverty.
According to Kring, countries can only break out of such vicious circles with international support in finance, trade and technology. The LDC category was created largely to target such support for those countries that most need it. Countries graduate from the LDC category by satisfying a complex set of economic and social criteria. But only four countries have graduated in the 45 years since this classification was established.
The economist projected Myanmar to be among 16 countries which will graduate from the LDC status within eight years. Yet, he does not think Myanmar will graduate much earlier than 2025, as it is a very long process in which every LDC needs to be measured twice for the graduation.
“I am not saying it is impossible but things will be difficult,” he said.

‘Preparation is pivotal’
Kring warned that it was time for Myanmar to be well prepared for the potential challenges beyond the graduation.
“The graduation means that some of these support measures are no longer available. Least developed countries have certain special treatments – the main one is the development finance and concessional loans. The second one is international trade – LDCs have preferential treatments regarding exports to the European Union and the United States. And the last one is general support for the development aid,” he said.
The economist said that graduation would impact on access to concessional financing, export markets, climate change funds, UN support and official development assistance.
“I did not say they will lose a lot. Most likely, they will lose some. But it also depends on the government’s availability to negotiate with those [donor] countries before the graduation,” he said.
He said that remittances would not be affected by the graduation, which would bring positive impacts to inflows of foreign direct investment into Myanmar. He believes that the nation will be well positioned to make a smooth transition with the right policy mix.
Myanmar still has a chance to enjoy some trade and loan preferences from donor countries, depending on what kinds of deals the government can negotiate with the donors before graduation, he said.