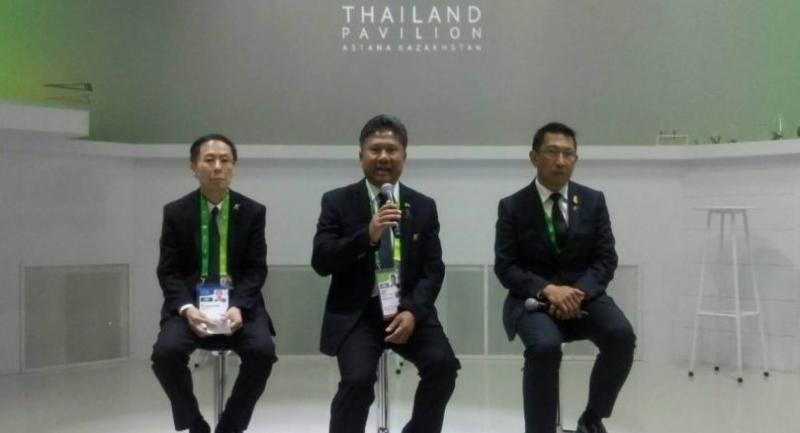 THAILAND hopes that China’s “One Belt, One Road” (OBOR) initiative would boost trade and investments as well as increase the number of tourists visiting Thailand from Eurasian countries, including Kazakhstan which is hosting the Astana Expo 2017.

During Prime Minister Prayut Chan-o-cha’s official visit to St Petersburg, Russia, in mid-May and for the Asean-Russia Summit, there were discussions on boosting trade volumes between the two sides by five times within five years. There were moves towards a free-trade agreement with the EAEU. The Thai Commerce Ministry and the Russian Ministry for Economic Development also signed a memorandum of understanding on trade and economic cooperation.

“After the International Recognised Exhibition or Astana Expo 2017 is complete, the event venue would be used as the Eurasian countries’ financial hub. Kazakhstan wants to become this region’s financial hub like Dubai is to the Middle East,” Nat said.

Nat also urged Thai businesses to adjust themselves and view this region as a niche market with demand for food. He said Thailand had a clear edge in supplying halal food, as well as for food crops such as coconut oil. “If Thai investors would explore investment opportunities in Eurasian countries, it could augur well for the future,” he added.

On June 27, a business-matching event will be hosted by the Thai Commerce Ministry allowing Thai businesspeople to discuss with foreign investors about hardware, auto parts, solar cell panels, health and beauty products, cosmetics, pharmaceutical products, food and drinks, according to Nat.

Kazakhstan, with abundant raw petroleum and minerals, has per capita GDP of UD$18,000 per head. About 50,000 Kazakh tourists visit Thailand each year. There are plans to launch marketing activities to woo more Kazakh visitors, he added.

Thailand’s Vice Minister for Energy, General Surasak Srisak, said that the Astana Expo 2017, held on a 1.74-million square metre plot of land in Astana under the theme “Future Energy” was expected to get 500,000 visitors and participants from 115 countries and 20 international organisations from around the world.

The Thailand Pavilion, or Sala Thai, was the first country pavilion to be fully finished and officially opened to visitors on Saturday. Surasak said he was confident this three-month period until September 10 would see the Sala Thai become one of the most admired and visited country pavilions.

Surasak believes participating in the Astana Expo is a great opportunity for Thailand to show the world the Kingdom’s readiness and potential which will also benefit Thailand in the tourism, cultural and agricultural export sectors as well as help boost the economy. This event will also strengthen ties between Thailand and other countries, especially Kazakhstan and the Commonwealth of Independent States (CIS) nations, as well as reveal the Thai government’s renewable energy policy internationally in terms of using and producing energy from agricultural products efficiently. This, in turn, will lift the price of Thai agricultural products and support more energy development, which suits the local communities in Thailand.

Permanent secretary of the Thai Energy Ministry Areepong Bhoocha-Oom also commented about Thailand’s situation that the Thai authority would soon adjust its plan of buying electricity from renewable energy sources by dividing the energy plan into regions. This would bring clarity to criteria such as energy type and the electricity amount to be purchased for each region to respond better to the people’s demands and lower future budget spending in constructing high voltage distribution lines, according to him.

Areepong said he had assigned the Department of Alternative Energy Development and Efficiency and the Energy Policy and Planning Office to study the potential of renewable energy sources in each region. He has also assigned the Electricity Generating Authority of Thailand to link the information to determine the needs of power plants for better efficiency in each region. This would lead to the establishment of power plants near the material sources in case of biomass power plants and near group needing electricity, which would be catered to via the Micro Grid distribution lines instead of the high voltage ones, he said.

According to the Alternative Energy Development Plan, the ratio for alternative energy use accounted for about 10 per cent, which the Thai authority hoped to increase to 25 per cent by 2021.