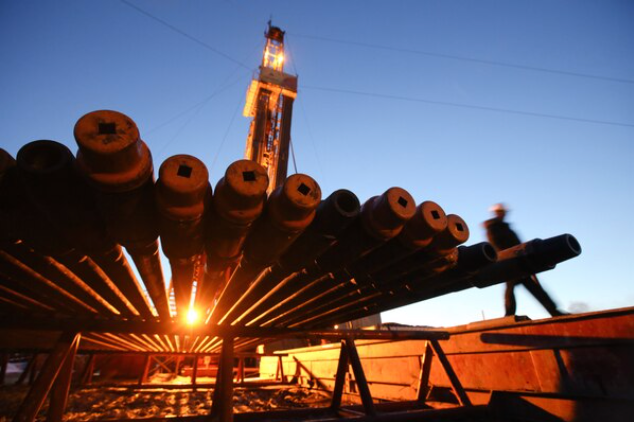 A worker passes an illuminated oil drilling rig and drill pipes, operated by Rosneft, near Nizhnevartovsk, Russia, on March 21, 2017. MUST CREDIT: Bloombrg photo by Andrey Rudakov.

As Russia's small oil producers struggle to survive a historic price crash, some say in private they wish they could just set their crude ablaze.

The sentiment, though wishful thinking, lays bare the scale of the issue for Russia during the global pandemic -- there is too much crude and nowhere to store it. While Saudi Arabia and the U.S. have more places to keep it, Russia is getting increasingly desperate. Even turning off the taps is expensive.

About 90% of Russian oil output requires complex, expensive technologies like hydraulic fracturing, according to Marina Mosoyan, consultant at Moscow-based Vygon Consulting. That makes turning wells off and on more complicated for Russian producers compared with their competitors in the Persian Gulf.

Shutting an average well in West Siberia, Russia's main oil province, would cost around 400,000 rubles (around $5,370), and bringing it back online around three times as much, Mosoyan estimated. That's big money, even for Russian oil majors, as their average lifting costs recently came to less than $4 per barrel, with their wells producing between 50 and 300 barrels per day, according to data from Oxford Energy. For smaller Russian independents, it may be financially unviable.

"Of course the independents will not burn their crude, they will simply shut the wells and go bankrupt," said Elena Korzun, head of Russia's Association of Independent Oil and Gas Producers.

To compound the problem, Russia has just eight days of available storage capacity, according to an IHS Markit report. That compares with 18 days for Saudi Arabia and 30 days for the U.S. "Those with better access to storage options may fare better than others. Creative storage solutions are likely to emerge, but they are unlikely to make up for the sheer pace and scale of the supply surplus," said Aaron Brady, vice president, IHS Markit in the note.

Currently, levels at Russia's largest storage facilities, run by crude-pipeline operator Transneft, are at acceptable levels, company's spokesman Igor Dyomin said. The operator owns the bulk of domestic storage capacity, which amounts to just over 23 million cubic meters. That's 145 million barrels, or about two weeks of the nation's production, however, Transneft couldn't take those volumes from producers and store them for longer than a month, as it needs some spare tank capacity to allow flexibility in shipments, and avoid bottlenecks at sea ports and refineries.

The situation is more desperate, however, at Russian refineries that have their own storage reservoirs. As domestic demand for fuel is shrinking, "oil-product storage at Russian refineries is filling up, there is no place to put oil," said Dmitry Perevalov, an independent Moscow-based oil trader and former vice-president for producer Slavneft Oil & Gas Co. Smaller producers, which usually operate as many as 10 wells and run no refineries, have no storage space at all, according to Korzun.

Russia's energy ministry is working to cushion the blow for the nation's oil industry, Tass said Wednesday, citing minister Alexander Novak. This does not cheer up the smaller companies. "We are not the key producers in this country, it will be the majors whose issues will be resolved first," Korzun said.

The country's westbound oil deliveries are especially vulnerable right now, said John Webb, director for Russian and Caspian energy research at IHS Markit, given that Europe, a key market for Urals crude, is still largely in lockdown amid the coronavirus outbreak.

While Russia's oil majors are putting on a brave face, independents -- 132 companies that together pump around 4% of Russian oil output -- are woefully exposed. "The big producers and the small ones have the same problems," said Andrey Polischuk, Moscow-based oil and gas analyst at Raiffeisenbank. "It's just that larger companies have more options and their issues are not so obvious."

The production cuts pledged by the Organization of Petroleum Exporting Countries and its partners are meant to ease the glut, yet they will not begin until May 1. That's less than two weeks away, but on Monday West Texas Intermediate plunged into negative territory for the first time and prices for Urals, Russia's main crude blend, hit levels last seen in early 1999.

"We have never seen such a deadly combination of unfortunate events," said Korzun. Smaller Russian oil companies whose interests she represents "are not even in the red zone, they are in the purple zone of risk now."

Shutting wells or idling them "is like death" for small producers as to restart them is a huge and costly mission, according to Semyon Vainshtock, former CEO of Transneft. About half of those wells will likely not be able to resume production, he said. The small companies "will start going to wrack and ruin."