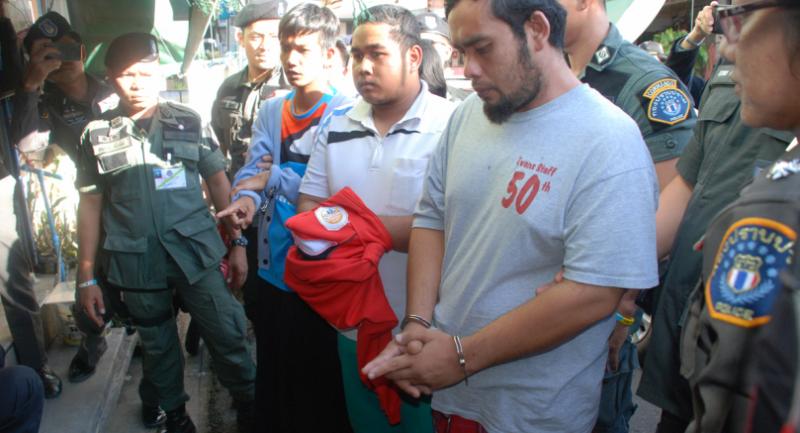 POLICE YESTERDAY said they had arrested three suspected Muslim insurgents who had planned to launch bomb attacks in Bangkok.

Deputy Police Commissioner Pol General Sriwarah Rangsipramkul admitted that |the three suspects had earlier been freed by a Narathiwat court after being detained by the military before the police rearrested them.
Sriwarah identified the three suspects as Talmeshi Totalyong, 31, Abdullashi Luakraji, 19, and Mubahri Kana, 22. They are all residents of Narathiwat.
The three were earlier detained by soldiers who invoked the emergency law but the Narathiwat Court freed them on Tuesday.
Sriwarah said the three suspects were rearrested by police based on a Criminal Court warrant dated last Friday, adding that they were charged with possessing illegal explosives and unlawful association.
Early last month, police said they had learned of a plot to launch car-bomb attacks in Bangkok by insurgents from the deep South, although there were not any reports confirming attacks outside the southern border provinces, which insurgents claim are independent of Thailand.
Rights activists have criticised police for stepping up crackdowns on student activists in areas near Ramkhamhaeng University after the alleged bomb plot was announced.
Sriwarah spoke at a press conference at the Crime Suppression Division head office where the three suspects had been detained after their arrest.
He said he had questioned the suspects for three hours.
Sriwarah added that at least one of the three had confessed to a plan to launch attacks in Bangkok.
Sriwarah said police had obtained evidence that the three suspects had met and planned the attack in a room behind a mosque on Soi Ramkhamhaeng in Bangkok’s Bang Kapi, in rented rooms in Samut Prakarn and at a house in Narathiwat from September to October 17.