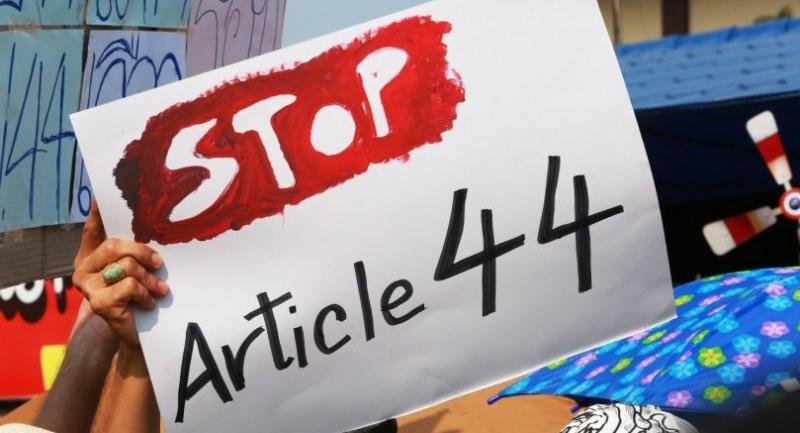 Lawyers call for revocation of Article 44 order at temple

THE THAI Lawyers for Human Rights Centre (TLHRC) has called on the National Council for Peace and Order (NCPO) to revoke the Article 44 order against the Pathum Thani-based Dhammakaya Temple and to use normal judicial procedures instead.

The TLHRC said in a statement that the use of the Article 44 order might lead to human rights violations.
The order authorises officers to take actions beyond their usual duties in line with normal judicial procedures, such as seizing an area, controlling infrastructure, searching premises, vehicles and persons as well as dismantling structures or barriers.
These actions could affect the rights and liberty of at least 6,000 people within the compound, many of whom have not been accused of any wrongdoing nor are the subjects of arrest warrants.
The lawyers said the order was also against the rule of law, as it specifically applied only to the temple, and it might also be against other international treaties that Thailand has ratified.
The statement said the situation at the temple did not yet require special measures because officers could still use their authority under the Criminal Code to search premises and arrest suspects, to summon people to testify or submit documents, and to punish those obstructing officers’ duties.
Lawyers also said the use of Article 44, which grants absolute power that is not subject to any form of checks and balances, was against the rule of law and might result in arbitrary use of power with impunity.
The NCPO chief issued the order on February 15 to declare the temple’s compound an area under control to facilitate the search for its former abbot Phra Dhammachayo.
The monk is wanted on charges of money laundering and receiving stolen assets linked to an embezzlement case involving the Klongchan Credit Union Cooperative as well as three separate cases of forest encroachment.