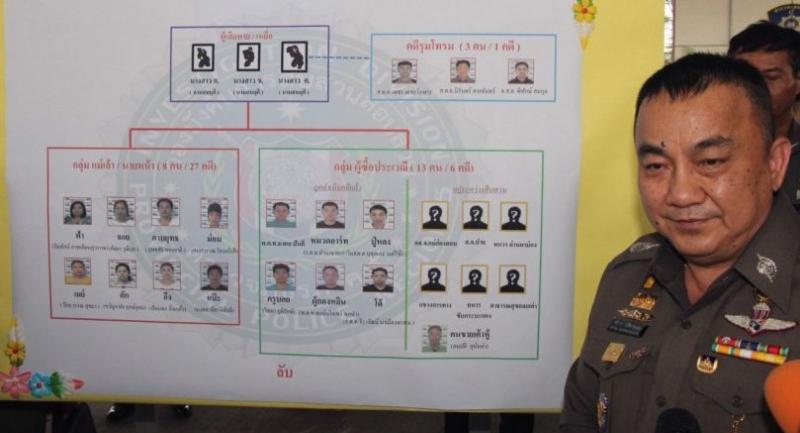 NINE MAE HONG SON police-men have been dismissed from the civil service and put under serious disciplinary investigation after being implicated in the northern province’s underage prostitution scandal.

They could also face legal action for their alleged involvement in the teenage vice ring, deputy national chief Srivara Ransibrahmanakul said yesterday.
The nine officers include alleged racket operator Pol Senior Sgt Major Yutthachai Thongchat of Nam Piang Din police station, three officers under Kong Koi police station who face charges of gang-raping of a minor, and five policemen for whom summonses were issued for over accusation that they paid to have sex with minors.
Srivara said police investigators were gathering evidence against seven more suspects – including several state officials, a soldier and a local politician – and hoped to make arrests soon.
He was speaking at Chiang Mai’s Provincial Police Region 5 office where he presided over a meeting to discuss an anti-human trafficking crackdown.
Srivara said the Mae Hong Son investigation saw local police handle 37 cases – 29 of human trafficking, seven of buying sex services, and one gang rape of minor – while the Anti-Human Traffic Division (AHTD) handled one human trafficking case in which all eight suspects had been arrested, including Yutthachai.
Earlier yesterday, Srivara went to Mae Hong Son to check progress in the investigation. He met some of the four police who showed up in response to summonses yesterday, but a teacher who reportedly moved away from the province failed to show up.
The fifth police officer, a deputy superintendent who is a lieutenant colonel, also did not appear, claiming he was preoccupied with work. But his supervisor said he had not been assigned with any mission.
Although the officer, who also now faces an investigation for omission of duty, is believed to have fled, investigators issued a second summons for him. If he fails to respond by May 15, an arrest warrant will be obtained.
Srivara also visited a police flat where the missing officer allegedly took a minor for sex but it was empty.
Also yesterday, a master sergeant under the Internal Security Operations Command, identified by victims as “Uncle Pan”, went to the Mae Hong Son police office to report to Srivara and hand over documents he said proved his innocence, but missed him. However, he caught up later at Mae Hong Son airport.
“Uncle Pan” said he knew the girls but his involvement with them was for intelligence-gathering purposes against the prostitution ring.
Although the AHTD earlier said there was no evidence that Mae Hong Son governor Suebsak Iamwichan was involved in human trafficking, Srivara said police would continue to investigate if he was guilty of buying sex services.
He said two witnesses who passed a lie detector test testified against the governor, which contradicted an Interior Ministry probe that initially cleared the governor. He said police would ask for more details of the interior ministry’s investigation.
Before Srivara left for Chiang Mai, the Civic Council of Mae Hong Son, presided over by Prasert Pradit, submitted its resolution on tackling human trafficking and prostitution to Srivara in the wake of the scandal. The council wants Srivara to pass the resolution on to the Prime Minister to request the province be turned into a pilot area for the government’s serious tackling of human trafficking, illegal lotteries, illicit drugs and corruption.
They also proposed three phrases of problem solving.
The short-term solution included protection and help for victims, clear and fair investigations, and police actions to punish those involved.
The medium-term solution included a follow-up process for this scandal and any similar cases in future, a symbolic campaign against human trafficking, promotion of whistle-blowing against illegal activities in the area, and regular checks by authorities on establishments that have been involved in human trafficking.
In the longer term, the council said there must be a campaign to promote proper values, as well as support for the province’s attempts to curb poverty and become a model in social and economic development.