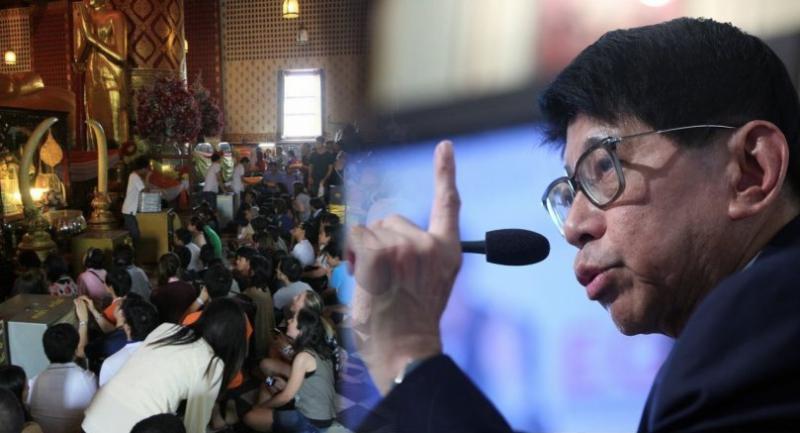 The National Office of Buddhism (NOB) is to meet with the Supreme Sangha Council (SSC) to find ways to make temple assets public for transparency and to prevent corruption, Deputy Prime Minister Wisanu Krea-ngarm said on Monday.

Citing a recent talk with Omsin Cheewapreuk, the minister attached to the Prime Minister’s Office who is in charge of the NOB, Wisanu said transparency has been a long-standing issue and there were many ways for temple assets to be disclosed to the public.
He said it was up to concerned agencies to find the appropriate way that would not go against the law or the cleric rules, or make the Thai Buddhist community feel uneasy.
Currently, each temple has a “Vaiyavajakorn” layperson temple affairs manager to handle financial matters along with an abbot. But such a system does not have punishments in case of violations, therefore the NOB and SSC should discuss the problem, he said.
Meanwhile, former senator and charter drafter Paiboon Nititawan on Monday urged authorities to probe whether abbots of the 12 temples were involved in the alleged embezzlement of Bt60 million in temple maintenance funds.
Paiboon also urged Prime Minister Prayut Chan-o-cha to order temples to have a proper accounting system and open the temple’s asset list to prevent corruption.
The comments followed a recent case in which four NOB officials were accused of corruption in office by siphoning Bt60 million from the temple maintenance funds of 12 temples in six provinces, while four other civilians were accused of aiding and abetting crime. The 12 involved temples were in Ayuthaya (1), Lamphun (1), Phetchaburi (1), Chumphon (1), Amnat Charoen (3) and Lampang (5).