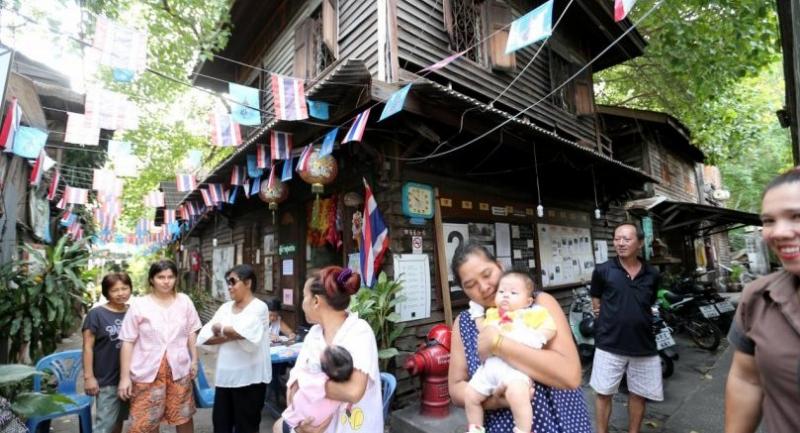 A tripartite committee is now trying to solve the decades-long dispute over an old community around the ancient Mahakan Fort in Bangkok.

While it is official that the Bangkok Metropolitan Administration (BMA) owns the plot of land around the white fortress, several local residents have refused to move.
The tripartite committee, which includes representatives from the BMA, the military, and local residents and academics, has been set up to explore solutions.
At the committee’s meeting yesterday, Thammasat University vice rector and legal expert Prinya Thaewanarumitkul suggested that residents who had lived in the area before the Royal Decree on Land Expropriation over the Mahakan Fort zone took effect in 1992 should be allowed to stay.
“They can stay if they comply with conditions set by the BMA, which also intends to conserve some old houses in the area. If longtime residents continue to live there, there is extra historical value,” he said.
Prinya said there were two legal options to let longtime residents stay – a new Royal Decree could be issued or the 1992 Royal Decree could be reinterpreted.
“The second option is possible because we may consider the conservation of an old community and old houses as part of efforts to conserve the historical site,” he said.
The tripartite committee has already agreed that at least two wooden houses, along with the community plan, should be preserved.
Nattanan Kallayasiri, assistant secretary to the Bangkok governor, said he had no objection to Prinya’s proposal but had some reservations about the plan.
“We need accurate information on who longtime residents are. We are worried about new encroachers who may try to claim the right to stay in the area,” he said.
The tripartite committee will convene two more meetings in the coming week before concluding the fate of the community.
Although many residents have relocated in response to orders from authorities, a few hundred people still live there.
Residents have for decades negotiated with authorities, saying they were willing to support the BMA’s plan to develop the area around the Mahakan Fort and offer free volunteer services, if they were allowed to stay in the community where their parents and grandparents lived.