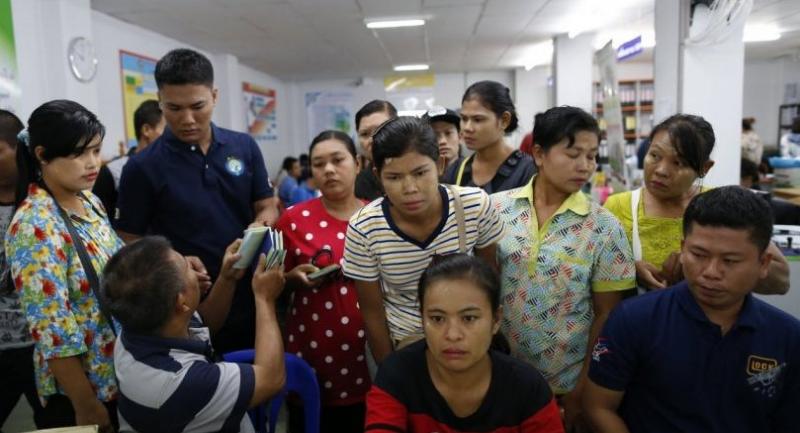 “We believe that we will be able to legalise the status of 2 million migrant workers during the period,” Labour Minister Sirichai Dithakul said.
Labour Ministry permanent secretary ML Puntrik Smiti said Saraburi, Chon Buri and Kamphaeng Phet respectively were the top three provinces with the highest number of migrant workers registering yesterday.

“Myanmar people are the biggest group of migrants registered. Coming next are Cambodians and Lao nationals,” he said.
Employers can register illegal workers from the three countries until August 7 at the temporary centres.
The centres are meant to minimise the impact of the Royal Decree on Managing the Work of Aliens 2017 – which carries Bt400,000 to Bt800,000 fines for employing illegal foreign workers.
Since it came into effect on June 23, employers have laid off illegally hired migrant workers, resulting in thousands heading back to their home countries and causing labour shortages in various sectors.
Prime Minister Prayut Chan-o-cha then invoked his special powers as the National Council for Peace and Order (NCPO) chief under Article 44 of the interim charter to suspend four key articles relating to the harsher penalties until the end of the year to allow further review. At the same time, the Labour Ministry has taken the initiative to register illegal workers.
In the border province of Sa Kaew, several employers took Cambodian migrant workers to register at the Department of Skill Development’s Sa Kaew branch office in Wattana Nakhon district.
The centres will process employers’ requests to hire migrant workers and verify papers to issue a document equivalent to a temporary passport. Workers will present the document to Immigration Police when they apply for a border pass or passport and come back into the Kingdom legally with a proper visa and health records.
Sa Kaew Employment Office head Wasan Palas said workers returning with a border pass could work in Thailand for three months while those holding a passport could work for up to two years.

Extortion hotline
Construction contractor Thonglor Thongkhao, 48, said he had two Cambodian and one Lao worker who did not have papers, or whose papers had expired, so he took them to register at the Sa Kaew centre to prevent future problems.
He said he paid workers, both Thai and foreigners, between Bt400 and Bt500 a day, adding that he hired migrants because he could not find Thai workers. Construction material shop owner Hattakarn Thawornying, 33, said she hired 10 Cambodian workers who used border passes to apply for work permits, which must be renewed every three months, because the cost of passports secured through an agent was as high as Bt20,000 per person.
The Labour Ministry says employers facing extortion regarding the use of illegal workers during the grace period could call 1694 for help from the government.