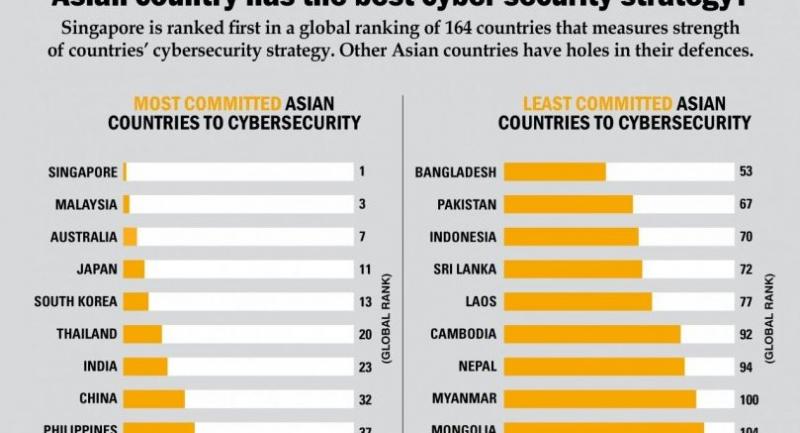 Singapore is ranked first in a global ranking of 164 countries that measures strength of countries' cyber security strategy. Other Asian countries have holes in their cyber defences, according to UN's latest Global Cybersecurity Index.

Ensuring cyber security is a continuous struggle that Asian countries face to ensure a safe and secure cyber environment.  Country with the best cyber security strategy is Singapore, according to the second Global Cybersecurity Index (GCI).
The GCI measures the commitment of countries across the world to cyber security. The GCI was recently released by the UN telecommunications agency International Telecommunication Union.

The ranking was based on countries' legal, technical and organisational institutions, their educational and research capabilities, and their cooperation in information-sharing networks.

In Singapore, the Cyber Security Agency spent around two years working on a bill that aims to raise the country's cyber-security posture.

Malaysia is ranked third among  164 countries in terms of its commitment to cybersecurity. The Country's Information Security Certification Body is credited with ensuring safe cyber space in the country.
Japan is ranked eleventh on the Global list. It has taken steps to improve its cybersecurity for government and for critical infrastructure. It has also engaged in bilateral cooperation with the U.S. and other like-minded nations to operationalise its cybersecurity priorities.
Ranked thirteen, South Korea is considered one of the most digitally connected countries in the world, making it vulnerable to cyber-attacks.  The South Korean government has been investing heavily in cyber security to protect the country's cyber environment and counter the threat from the North. Thailand is ranked twentieth on the list. It has engaged in complex commitments and taken many initiatives to strengthen its cyber security programmes.
India is ranked 23rd on the index with a score of 0.683 and has been listed in the "maturing" category.  According to India's Minister of State for Electronics, the country suffered more than 27,000 cyber security threat incidents in the first half of 2017.
Ranked below India, China's new cybersecurity law focuses on protecting personal information and individual privacy. Other Asian countries have scored badly.
Bangladesh is ranked 53rd on the index with a score levelling with Brunei, and has been listed in the 'maturing stage' category (GCI score between the 50th and 89th percentile), which refers to 77 countries that have developed complex commitments to cybersecurity and engage in cybersecurity programmes and initiatives.  Other Asian countries listed in the maturing category include Pakistan,  Indonesia, Sri Lanka , Laos, Cambodia and Nepal.
Myanmar and Cambodia stands lowest at 100th and 104th out of 164 countries in the survey.