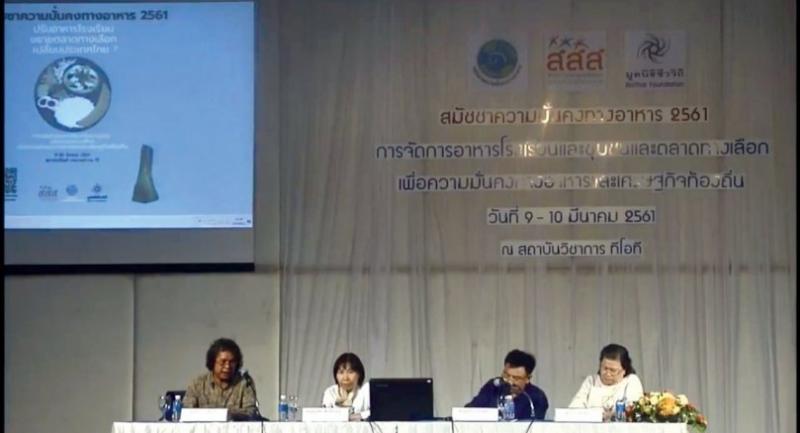 MORE THAN 815 million people around the world still suffer from malnutrition and hunger – 6.5 million in Thailand – but on the other hand 25 per cent of the population in developed countries were obese, including 5 million in Thailand, pointing to glaring inequalities in access to food.

Biodiversity, Sustainable Agriculture, and Food Sovereignty Action Thailand Foundation (BioThai) yesterday published its 2017 annual report on the food security situation for Thailand, which revealed a worrying trend of a widening inequality gap in the access to food.
BioThai Foundation director Withoon Lienchamroon said that despite being a food exporting country, some 6.5 million Thais still did not get enough food and more than 600,000 children suffered from malnutrition, which affected their physical development. At the same time, the obesity rate had doubled from the last decade in Thailand and more than 5 million people were judged to be overweight.
Withoon said that this problem pointed to inequalities in society but said it was a global issue. The Food and Agriculture Organisation (FAO) had reported similar findings that throughout last year the victims of hunger across the globe had increased to 815 million from 717 million in 2016, blowing away the aim to eradicate world hunger within 2030 as per United Nations’ Sustainable Development Goals.
He stated that the worsening food security situation due to more frequent disasters and wars was happening at the same time when 25 to 27 per cent of the population in the developed countries had health problems from being overweight as a result of eating excessive food.
“The problem of food access continues to be a significant outcome of social inequality, as the poor have limited food choices and often do not get enough, but the rich enjoy the privilege of access to larger amounts and diverse varieties of food,” Withoon said.
“The lavish consumption also generates large quantities of food wastes. Statistics show that 449 million tonnes of food were wasted in Asia alone last year, and this food waste could feed millions of people who do not have enough food.”
He also warned that there were still many factors that could jeopardise food security for Thailand such as the planned enforcement of seed patents in the new Plant Varieties Protection Bill, which will ban farmers from collecting purchased seeds to regrow next season.
“Even though the plan to enforce this law was postponed by the former Agriculture and Cooperatives Minister, there are still efforts to push forward this bill, because the Thai government will sign the Free Trade Agreement with the European Union and this law is one of the conditions,” he said.
“The other issue of concern is the government still does not ban the use of toxic chemicals in the agricultural sector such as paraquat and glyphosate despite many countries, including China and Brazil, already banning these chemicals that put consumers’ health at risk from chemical contamination in food.”