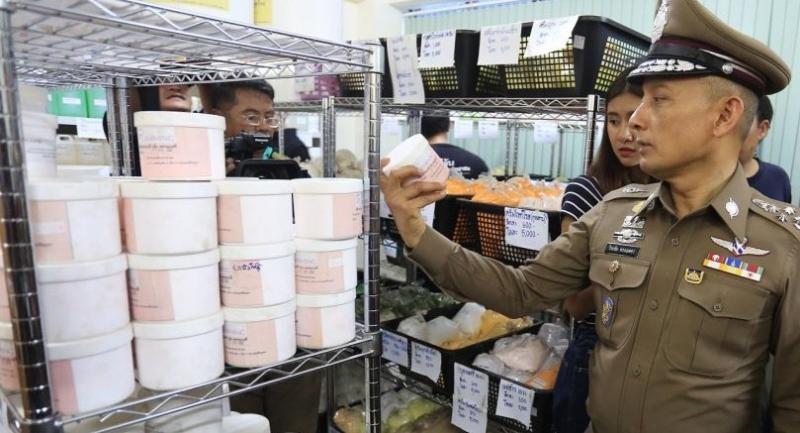 Weerachai said the use of so many officers in the search was required as reflected in the 30 truckloads of evidence seized.

The officers also warned people not to obstruct their search as such an action would be punishable by up to two years in prison and up to a Bt40,000 fine.
Police on Thursday searched 107 shops – 90 of which were allegedly found selling illegal products – and six shops on Wednesday.
At one of the targeted locations on Friday, officers found a large amount of creams, cosmetics and soaps that were awaiting packaging, as well as cosmetics-making substrates and raw ingredients in a four-storey building near the market.

The place was rented by the owner of an unregistered company that has in the past two years taken orders to package 1,000 products from other companies for distribution nationwide, Weerachai said. Although the company owner denied making products for anyone, police found ingredients and tools there convincing them otherwise, he said.

The officers also seized a printer, some product labels and a book recording customers’ names and contact information. They found a Food and Drug Administration (FDA) registration number on facial gel labels that did not actually exist in the FDA system, Weerachai said. The labels also failed to indicate a manufacturing factory address and made an exaggerated claim of whitening skin within five days of use, he added. The products were seized for testing of prohibited substances by the Medical Science Department. Weerachai vowed police would continue the crackdown on illegal product makers and distributors at that market and in other locations.

He said police are investigating whether the Talad Mai Don Muang owner should face a charge in relation to the presence of controversial products. FDA deputy chief Prapon Angtrakul said FDA officials would randomly check products and, if any had label |information that didn’t match the information registered with the FDA, that product would |be removed from the FDA system and become illegal.