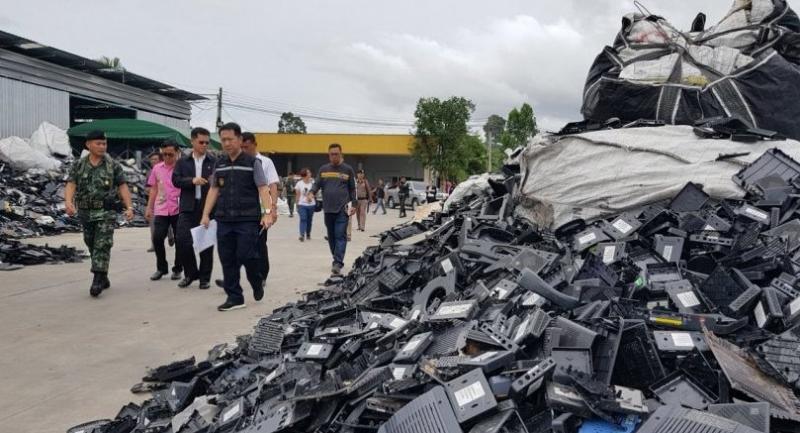 Waste import licences ‘will not be renewed’

LICENCES issued to companies previously authorised to import electronic and other wastes for recycling and disposal in Thailand will not be renewed, the Department of Industrial Works said yesterday.
The department is also preparing to issue an immediate ban next week on remaining shipments slated for the rest of this year. Mongkol Peukwattana, the department’s director-general, said licensees that have not committed any wrongdoing can continue their business but their permits will not be renewed.
Meanwhile, deputy National Police chief Pol General Weerachai Songmetta said a working group is investigating cases of wrongdoing involving the smuggling into the country of hazardous wastes, resulting in public health and environmental problems.
Deputy Prime Minister Prawit Wongsuwan recently set up a multi-agency committee to tackle the issue after authorities found that more than 90,000 tonnes of imported electronic and other hazardous wastes were handled improperly.
Some government officials were also found to have aided in the wrongdoing by failing to strictly enforce the regulations.
Prawit has suggested the use of an order under Article 44 to tackle the problems as the multi-agency committee will finalise a package of short- and long-term solutions next week.
Government sources said Thailand may also consider withdrawing from the 1997 Basel Convention on transboundary movements of hazardous wastes and their disposal due to challenges in enforcing strict regulations on the import of electronic and other dangerous wastes into the country under the international agreement.
It has been learned that there have been longstanding problems involving domestic transportation of these wastes, as well as importing international wastes into the country and separating and managing the wastes.
In most cases, the licensees and their sub-contractors have failed to follow the required strict procedures in the handling of these wastes and their disposal, and this had resulted in public health and environmental risks. The five companies licensed under the Basel Convention that have so far been found to have violated regulations, will have their remaining import quotas of wastes revoked. Another two licensed companies are under investigation due to illegal shipments of wastes into the country. Under the Basel Convention, Thailand has allowed imports of electronic, plastic, used electrical appliances and other wastes for recycling and disposal.
Some companies licensed by the Thai government are reportedly controlled by firms from China. That country was until recently a major international destination for recycling and waste disposal, including wastes from developed countries. China recently announced a ban on most waste imports, leading to an increase in diversion of these wastes to other Southeast Asian nations, including Thailand.
The shift of these wastes from China to Thailand has resulted in a growing number of complaints from provinces where recycling factories and dumping sites are situated. Complaints focus on hazards to health and the environment, especially after the zoning system was changed to facilitate the recycling and waste management industry.