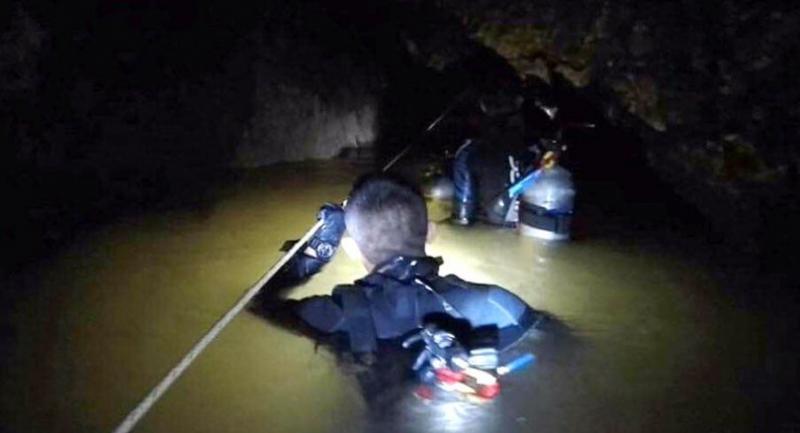 RESCUE TEAMS plan to take a risk, if manageable, in escorting 13 survivors out of the flooded Tham Luang cave as they believe staying inside longer may prove even riskier in the rainy season.

Although four rescue options have been discussed, it is now quite clear that decision-makers will go with the option of evacuating the 12 boys and their football coach through a 5km stretch that will require both diving and trekking. For each of them, this journey could take many hours. Even with all their training, it takes the Royal Thai Navy SEALs about five hours to move from Noen Nom Sao to the third chamber of the cave.
Noen Nom Sao is where the 13 members of the Mu Pa Academy Mae Sai, a local football team, have been stranded since June 23. The third chamber, which now serves as the forward command for rescue operations, is about a few kilometres from the mouth of the cave.
The diving-and-trekking evacuation is considered dangerous, given that the 13 trapped victims have had no swimming or diving experience, but this method is considered the quickest way to evacuate them.
“Our major concern is the weather because, despite our best efforts to drain the water, we cannot beat the rising floodwater level if there’s heavy rain,” Narongsak Osotanakorn said yesterday in his capacity as the chief of the rescue operations.
Flash floods hit the Tham Luang cave in Chiang Rai province on June 23, leaving the 12 footballers aged 11 to 16 and their coach stranded inside.
Narongsak has since headed the rescue operations, which involve more than 1,000 officials and volunteers.

Experts from many countries have also helped in the life-saving mission, which has become big news across the world.
“The SEALs are able to go back and forth and the stranded children are at a safe location, but a higher water level would make the rescue operation even harder,” he explained.
In the absence of heavy rain, powerful pumps have significantly lowered the floodwater level inside the cave this week.
For the first time since rescue operations started, it was possible yesterday for rescue teams to walk into the third chamber of the cave without the need to dive at all. The first two-km stretch of the cave, from its mouth, is now flooded with no more than knee-deep water.
The third chamber functions as the forward command for the rescue efforts. It stores oxygen tanks, goods, necessary supplies and communication devices.
The lower the water level, the greater the prospects of evacuating the trapped boys and their coach through the main entrance of the cave.
As rescue planners work hard on draining out the floodwater, the SEALs are familiarising the 13 survivors with diving gear and skills that will help them during their evacuation.
“We have not yet decided when they will be evacuated,” Narongsak said. “We need to consider several factors including weather conditions.”
He said it would be best for them to move out when floodwater levels hit the lowest possible.
“But we also need to consider their physical condition. Medics will decide on that. Physical rehabilitation is now going on at Noen Nom Sao,” he said.
According to him, 13 sets of diving gears and escort teams have already been prepared.
“If physical examination shows the survivors may not be 100 per cent ready but all risks involved are within manageable levels, we will go ahead with the evacuation immediately,” Narongsak said. “Doctors and SEALs will make the evaluation.”
Diving experts have said that it will be really hard for the trapped boys and their coach to make the journey by diving through cold and muddy waters.
Rescue planners, however, have assured that there will be two SEALs escorting each of the survivors.
Rod lines and oxygen tanks have already been installed at the diving sections too.
Narongsak said at the same time, many rescue teams continued to explore areas above the Tham Luang in the hope of finding a better way to evacuate the 13 survivors.
Three other possible options to evacuate the 13 survivors are: to drill into the cave and get them out; to find a natural shaft that can connect to the cave naturally or with a drilling solution; and to have the 13 survivors stay inside the cave with necessary supplies until the rainy season ends.
All three options carry some risks. Therefore, rescue planners have decided to try to teach the 13 survivors how to swim and dive so that they can brave their way out.