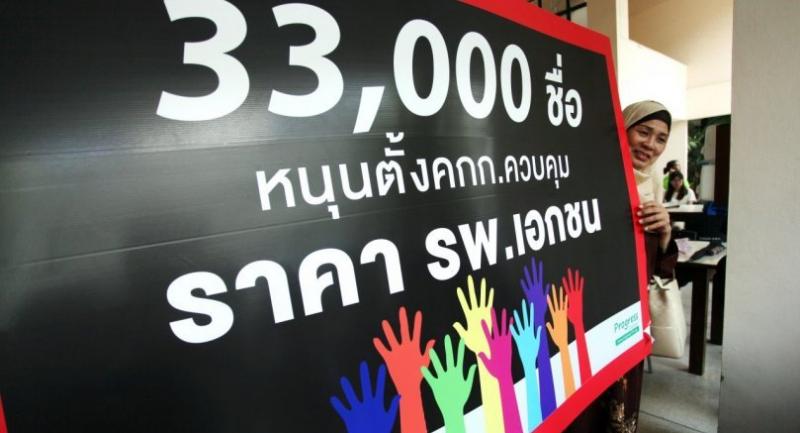 FRESH EFFORTS to make private hospitals “affordable” have now ramped up, with consumer-protection groups voicing their suspicion that private operators may be too focused on making profits and losing track of the core humanity essential to quality medical care.
“We understand that hospitals need profits to stay afloat, but they should strike the right balance between profit-making and humanity,” Supatra Nacapew, member of the Independent Committee for Consumer Protection, said.
She called for relevant authorities to intervene and control prices set by private hospitals amid reports that some families have had to sell land and home to foot medical bills.
Prayoth Benyasut, deputy director-general of the Internal Trade Department, said his department was now addressing the issue in consultation with the Health Service Support Department.
“We’ve already had one meeting, and our next meeting will take place on November 19 [yesterday],” he said late last week.
Discussions have so far focused on requiring private hospitals to clearly display prices, so people can make informed decisions on whether to seek their services, Prayoth said.
Medical facilities are required by law to display prices and failure to do so can result in a fine of up to Bt10,000. However, patient say sometimes they cannot find where the prices are displayed.
Last month, the Internal Trade Department inspected 62 hospitals and found that some had posted prices in their websites, while others simply kept the list in their internal computer system.
When asked about calls for the authorities to control medical-service fees, he said a major issue like this would require further discussions between the Commerce and Public Health ministries.
“If both ministries agree with [establishing] controls, it will be proposed to the Central Committee on Product and Service Prices. If the committee approves it, then the proposal will go to the Cabinet,” Prayoth explained. Petrol and sugar are now among the products whose prices are subject to control.
Dr Pongpat Patanavanich, president of Private Hospital Association, said private hospitals charged patients much higher fees than state hospitals because they shouldered larger costs.
“The government covers staff salaries at state hospitals, but not at private hospitals,” Pongpat said. “Also, state hospitals are usually able to purchase medicines at a much lower cost because of bulk purchases.”
Pongpat also challenged claims that private hospitals were too preoccupied with making profits to care about the patients. “We have joined the country’s UCEP [Universal Coverage for Emergency Patients] even though we know participating will cost us money,” he said.
Though the government reimburses private hospitals for the treatment of UCEP patients, the rates provided are much lower than the actual cost, Pongpat added. Initiated by the government, UCEP allows emergency patients to receive free medical services from any hospital in the first 72 hours.
Saree Ongsomwang, secretary-general of the Foundation for Consumers, said at the very least, the prices of about 1,000 medicines required for emergency treatments should be controlled.
She also asked relevant authorities to define more clearly which symptoms qualify for UCEP. When patients go to a hospital hoping to receive medical services under UCEP, they might later find themselves having to pay a hefty bill if their condition is deemed as a non-emergency.
The Independent Committee for Consumer Protection has been advocating for price controls in the medical sector since 2015. “Since not much progress has been visible, we have stepped up our efforts again,” she said.
Saree spoke after submitting a petition to the Central Committee on Product and Service Prices. She will soon submit another petition to the Public Health Ministry, she added.
A source said private hospitals were firmly opposed to any move to control their service fees.