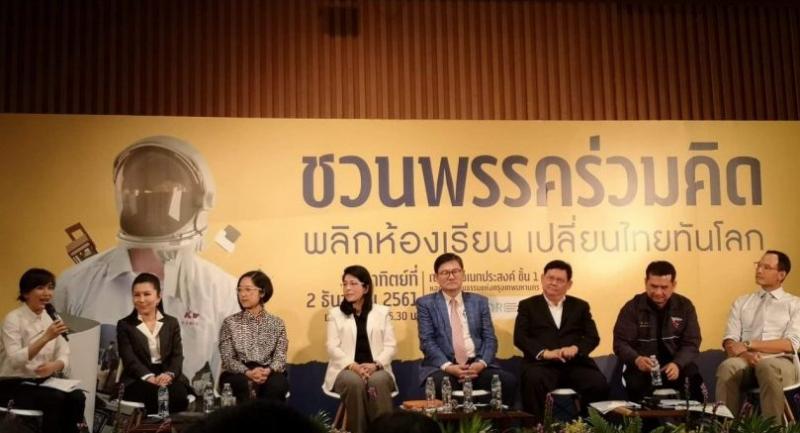 Major political parties provided a glimpse of their education policy platforms to help Thailand reform its failing education sector, as the country counts down to next year’s general election.

Political campaigning is prohibited for now and is likely to be permitted mid-December.
Pheu Thai Party’s key member Sudarat Keyuraphan voiced support to decentralising power from the Education Ministry to schools.
She explained that the Education Ministry should be responsible for “overseeing standards”, while state-run schools should be given the freedom to “use their budgets to hire their own teachers”, and “include parents and communities” in making decisions related to their children’s education.
“Funds should also be provided for students before they enter university,” she added.
Sudarat was speaking at a panel discussion on education reform held by Thailand Education Partnership and Thailand Development Research Institute (TDRI) on Sunday.
Democrat Party’s former finance minister Korn Chatikavanij backed similar reforms where schools are run by a board comprised of school directors, teachers, communities, parents, and alumni. He also said that teachers should be chosen and hired by schools directly.
“These are my views concerning the decentralisation of power,” he said.
Korn also said the Democrat Party might extend free school lunch programmes to include not just primary school, but also secondary and high school.
Science and Technology Minister Suvit Maesincee, a deputy leader of the pro-junta Palang Pracharat Party, said he too supported the distribution of power from the Education Ministry, as well as spreading wealth from Bangkok to the provinces.
Educational academic-turned-politician Kulthida Rungruengkiat, meanwhile, said her Future Forward Party would focus on issues such as better teacher training, better equipment for vocational school, and “making the Education Ministry more efficient”.
According to TDRI president Somkiat Tangkitvanich, Thailand has never been short of initiatives on education, but it is the nature of these policies that are problematic.
He said most policies are so-called quick-win ones that aim for quick fixes. This is because in the past 20 years, the Education Ministry has seen 21 ministers and policies that change when the new minister takes office, he added.
“We want political parties to come together and vow to continue education reform from the very beginning of the new administration,” he said.
Thailand was ranked 54th in the 2015 PISA test for overall maths, reading and science competency –far behind many other Asian countries, like Vietnam, which was ranked 8.