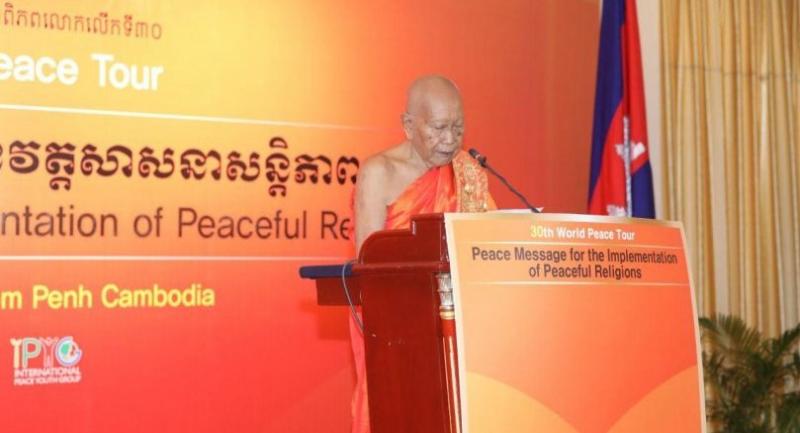 Over 1,000 social representatives, including men and women from Asean member states, religious leaders and NGOs, gathered in Cambodia to discuss ways to make peace in Southeast Asia, according to a South Korea-based NGO Heavenly Culture World Peace Restoration of Light (HWPL).

Held in Phnom Penh on Thursday and Friday with the theme of “Cooperation and Leap for Realization of Peace”, the event discussed a global partnership to develop peace-building measures. The event also considered Southeast Asian efforts for decades to tackle violent extremism including terrorism and internal conflicts.
HWPL is committed to bringing world peace and cessation of war to have a United Nations resolution for an establishment of an enforceable Declaration of Peace and Cessation of War (DPCW).
The conference also discussed the role of religion in overcoming religious conflicts and protecting individual religious faith.
About 450 participants including religious leaders from Buddhism, Islam and Christianity in Cambodia, South Korea, Thailand, Vietnam, India and Singapore joined the forum.
Cambodian supreme monk Tep Vong expressed his support to peace efforts saying that international cooperation as championed by HWPL could end wars and conflicts.
Religions were used as a pretext for communal conflicts in many places in the region including Myanmar, the Philippines and Thailand.
“Religion should serve as an educator teaching good behaviour to all people in the world. However, some religions are threatening freedom of religion and human rights of religious people. Each religion must cease to do evil in the name of religion,” Hoy Sochivanny, President of Positive Change for Cambodia said.
Hee Lee, the chairman of HWPL, urged the forum to support his efforts to have UN resolution for DPCW saying: “Now we have the answer within the 10 articles and 38 clauses of the DPCW to achieve peace and end the war. There is no one who doesn’t want peace.”
HWPL has proposed the need for global ties of peace to UN officials from 145 countries, according to an HWPL official.