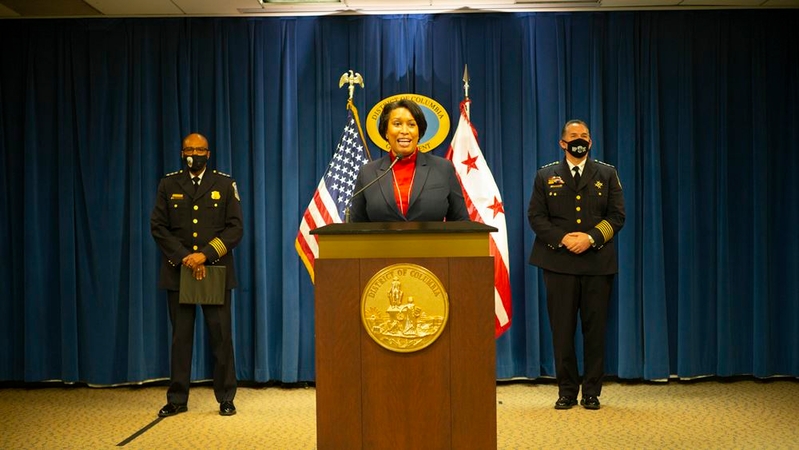 WASHINGTON - The District has mobilized the National Guard and will have every city police officer on duty Tuesday and Wednesday to handle protests of the November presidential election, which Mayor Muriel Bowser said may include people looking to instigate violence.

Bowser, a Democrat, has asked D.C. residents to stay away from downtown Washington on both days while members of far-right groups, including the Proud Boys, amass to falsely claim President Donald Trump was reelected.

Trump - who lost both the popular and electoral-college vote to President-elect Joe Biden - has continued to dispute the results, without evidence, and is encouraging his supporters to attend the rallies.

He has said he might appear at Wednesday's demonstration at the Ellipse, just outside the White House, which is timed to coincide with Congress's vote to certify the election results - a formality that this year will be a fraught and divisive process.

"People are allowed to come into our city to participate in First Amendment activities," Bowser said Monday. "We will not allow people to incite violence, intimidate our residents, or cause destruction in our city."

Pro-Trump protests in November and December, which included some of the same groups, ended violently, with multiple people stabbed and several Black churches vandalized. This time, members of right-wing groups have discussed how to bring guns into the District despite laws banning open carry throughout the city and prohibiting guns on such federal lands as the Mall and Freedom Plaza or anywhere within 1,000 feet of a protest.

Bowser said that the National Guard members, who will not carry guns, will help enforce street closures and otherwise assist with crowd management so that D.C.'s police department can focus on law enforcement, including arresting anyone who is unlawfully carrying a gun.

Defense officials said the Pentagon approved the activation of more than 300 members of the District of Columbia National Guard, but limited the size and scope of the mission after a deployment in June raised questions about whether the Trump administration was trying to use the military as a political club.

Two defense officials familiar with the plans, speaking on the condition of anonymity due to the sensitivity of the issue, said the guardsmen are not expected to use armored vehicles, including Humvees, relying instead on civilian vans owned by the government. The military also has not approved the use of its helicopters, which were deployed over racial justice protesters in June in an apparent show of force, prompting a military investigation whose results still have not been released.

No National Guard members from other states are expected to be called into D.C., the officials said - again, in contrast to June.

The smaller military presence comes as current and former defense officials warn against relying on the Armed Forces for election-related activities. The military, with its nonpartisan tradition, should not be dragged into politics, they have said.

On Sunday, all 10 living former defense secretaries combined to publish an op-ed in The Washington Post warning that the time has come to stop contesting presidential election results, and that the military should have no role in overturning them.

The National Park Service began issuing permits Monday for the so-called "Stop the Steal" rallies, which are expected to begin Tuesday afternoon and continue through Wednesday.

Women for America First - a group behind a pro-Trump march in November and another on Dec. 12 that ended in a night of chaos on D.C. streets - was granted a permit to host about 5,000 people on the southern half of the Ellipse on Wednesday morning. A list of potential speakers includes longtime Trump ally Roger Stone, whose sentence for seeking to impede a congressional probe into Russian election interference was commuted by Trump in July before being upgraded to a full pardon, and Rudy Giuliani, Trump's campaign attorney, who has waged a roundly unsuccessful legal fight to overturn the election results.

Groups questioning the election outcome will also hold protests at Freedom Plaza, on Pennsylvania Avenue NW, on Tuesday afternoon and outside the Capitol at 1 p.m. on Wednesday.

Though no organized march between the Wednesday rallies has been planned, organizers said they expect a large number of attendees to make their way from the Ellipse to the Capitol at the conclusion of the morning event.

Pro-Trump protesters have also frequently visited the stretch of 16th Street NW north of the White House that Bowser renamed Black Lives Matter Plaza during the summer demonstrations, where they have torn down signs honoring Black leaders and victims of violence and demanding racial justice.

Acting D.C. police chief Robert Contee III, who assumed the position just this week, said Monday that police might close off the plaza to all pedestrians if conditions warrant.

The organization Black Lives Matter DC put out a statement Monday asking Bowser to go further than she has so far in her denunciation of far-right demonstrators.

The statement included three specific demands: that businesses in the District refuse to do business with "white supremacists and hate groups who incite violence"; that D.C. officials do more to enforce mask and social distancing protocol among rallygoers; and that D.C. lawmakers do more to "protect our sacred Black spaces."

"The authorities have no problem keeping the White House - and the white man inside - safe; Black people expect and demand no less for our sacred Black spaces, including Black churches and Black Lives Matter Plaza," the group wrote.

Bowser said Monday that police would focus on enforcing gun laws and addressing any potential violence, and would not arrest or fine people for violating the city's masking and social distancing requirements.

She said she would consider imposing a curfew if needed, as she did during racial justice protests in June.