'We will be back in some form,' Trump tells crowd as he leaves Washington

WASHINGTON - President Donald Trump departed Washington for the final time Wednesday morning with a melancholy farewell - and a vow to return to the political arena - though he still did not directly acknowledge that voters had turned him away.

Trump had imagined a showy military send-off that more resembled authoritarian pageantry than the placid rituals of American electoral democracy. In the end, a military band played "Hail to the Chief" and cannons fired in salute after a modest crowd of a few hundred aides and other loyalists showed up at Joint Base Andrews to see him off.

"This is a great, great country. It is my greatest honor and privilege to have been your president," Trump said as his audience chanted, "Thank you, Trump!"

"I will always fight for you," Trump said. "I will be watching. I will be listening. And I will tell you that the future of this country has never been better. I wish the new administration great luck and great success. I think they'll have great success. They have the foundation to do something really spectacular."

As Trump concluded his remarks, he vowed, "We will be back in some form," and he told his supporters, "Have a good life."

Trump and first lady Melania Trump boarded Air Force One shortly before 9 a.m. for their final flight on the presidential aircraft, arriving at Palm Beach International Airport in South Florida just before 11 a.m. They will take up residence in Palm Beach at Trump's private Mar-a-Lago Club.

Trump modeled his send-off event on the martial-themed arrival and departure ceremonies for foreign dignitaries. With a stiff wind whipping the American flags behind him, the outgoing president spoke from a stage lined with campaign-style bunting, with Air Force One in the background.

But for all Trump's love of a spectacle, the event had more of a feel of a county fair than a big-budget extravaganza. In a Trumpian twist, the music that played as he ended his remarks was the Village People's "YMCA," a sing-along staple from his boisterous political rallies. Then, as Air Force One began to roll on the tarmac, Frank Sinatra's "I Did It My Way" blared from the loudspeakers.

Noticably absent from Trump's send-off were the three elected Republicans who had worked most closely with him - Vice President Mike Pence, Senate Majority Leader Mitch McConnell, Ky., and House Minority Leader Kevin McCarthy, R-Calif. All three instead attended Biden's inauguration, which Trump decided not to attend, bucking the traditional transfer of power.

Earlier in the chilly winter morning, the Trumps walked out of the White House residence for the final time. A subdued Trump told reporters that serving had been the "honor of a lifetime."

The Trumps then boarded Marine One, which lifted off the South Lawn at 8:17 a.m. and carried the couple into the brilliant morning sky. They flew over a fortified city of checkpoints and armed soldiers amid threats of another attempted insurrection by Trump supporters.

Trump released a farewell video on Tuesday in which he noted the arrival of a new administration and wished it luck, but did not mention Biden by name, nor did he concede or directly address his own defeat.

Instead, Trump touted his record as president and declared that "the movement we started is only just beginning."

The message, which was recorded at the White House on Monday, was released at roughly the same time that Biden, his wife Jill Biden and other family members arrived by plane at Andrews from Delaware, Biden's home state.

On the same tarmac Wednesday morning, Trump was celebrated by an ad hoc gathering of supporters and a red-carpet ceremony. A booming sound system played pop music and selections from the Trump campaign rally playlist, including "Billie Jean" and "Saturday Night's Alright." 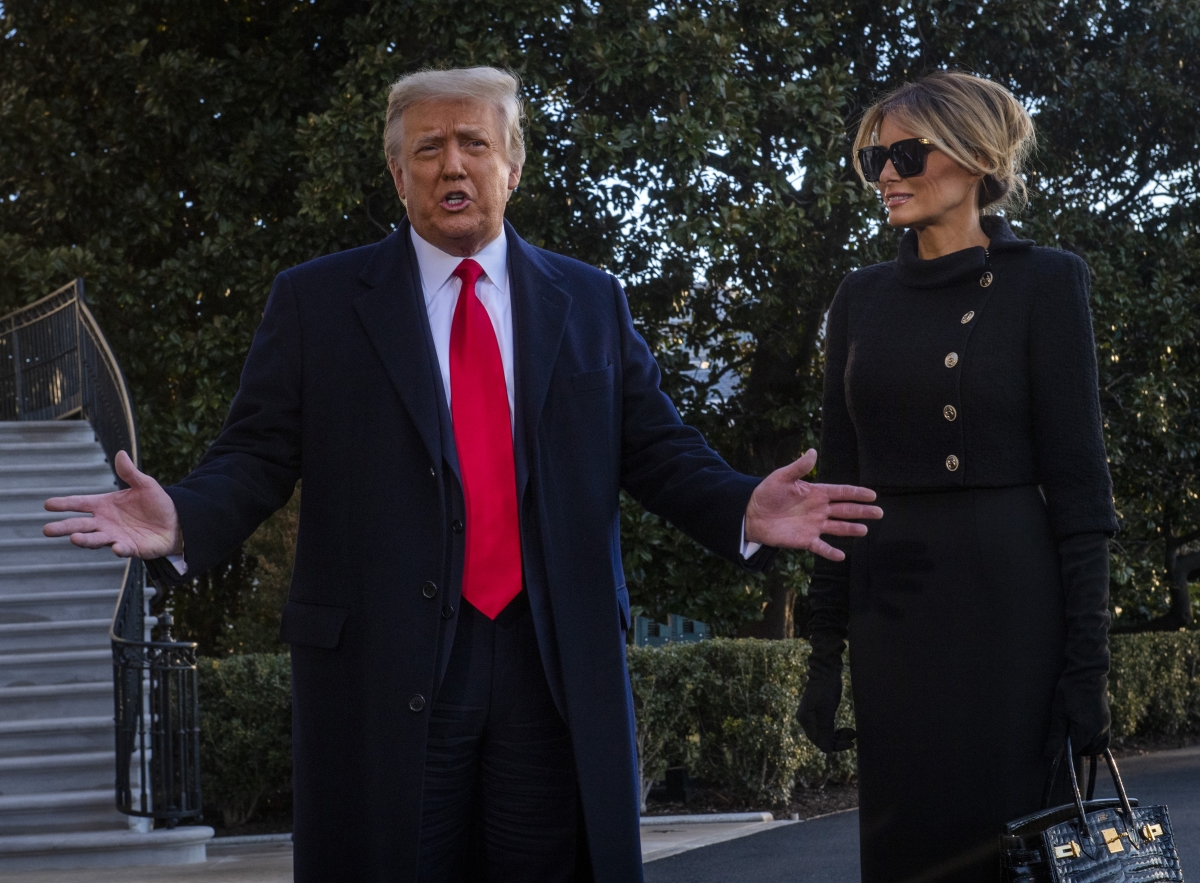 Trump leaves as the nation reached the grim milestone of 400,000 dead, with tens of thousands more deaths expected before the grinding coronavirus pandemic subsides.

The crowd stood shoulder to shoulder in front of the stage despite public health recommendations against close contact with others, even outdoors. Most in the crowd wore face masks, a change from Trump campaign events and some high-profile gatherings at the White House dubbed super-spreader events.

In one of his final acts as president, Trump granted pardons early Wednesday morning to 143 people, including former White House strategist Stephen K. Bannon and other well-connected celebrities, as well as nonviolent drug offenders. But despite his interest in doing so, Trump ultimately did not preemptively pardon himself or members of his immediate family.

In Trump's four years in office, America has become more divided than at any other point in recent history - spurred, in part, by the president's inflammatory rhetoric toward his political opponents and toward immigrants, people of color, women and other groups.

On the eve of Trump's departure, McConnell pointedly accused Trump of having "provoked" the violent mob that stormed the U.S. Capitol on Jan. 6.

Nonetheless, in his taped farewell address, Trump attempted to cast his presidency as one marked by a bipartisan spirit.

"Our agenda was not about right or left, it wasn't about Republican or Democrat, but about the good of a nation, and that means the whole nation," Trump said.

He condemned the violence but did not address his own role in urging his supporters to march on the seat of the national legislature in his name. He also did not retract his false claim that the Nov. 3 election was "rigged" and stolen from him.

"All Americans were horrified by the assault on our Capitol. Political violence is an attack on everything we cherish as Americans," Trump said. "It can never be tolerated. Now, as I prepare to hand power over to a new administration at noon on Wednesday, I want you to know that the movement we started is only just beginning."

In his video, Trump also declared, "We built the greatest economy in the history of the world," in what amounts to his 493rd time repeating the falsehood, according to The Washington Post's Fact Checker.

Trump last week became the first president in U.S. history to have been impeached twice. The Senate is expected to begin its trial of Trump next week, with Democrats pressing not only for conviction but also for Trump to be barred from running for office again.

Trump had announced earlier this month that he would not attend Biden's swearing-in. Biden said the decision was one of the few things he and Trump agreed on.

But the snub means that Biden will become president without the symbolic handoff that has been the norm since Andrew Johnson, the last president to voluntarily skip the inauguration of his successor.

Trump did leave a note for Biden in the presidential Resolute Desk, as has been customary for departing presidents, according to a White House official. The official did not disclose what was written.

The rival celebration at the military base formerly known as Andrews Air Force Base breaks yet another norm of presidential behavior. Recent departing presidents have kept the focus on the new guy, with only low-key public demonstrations of gratitude for staff and friends.

Trump was still president when he departed, so the retrofitted Boeing 747 jet he used was properly called Air Force One. Recent past presidents have left Washington on the same plane, but only as a courtesy extended by the new president.

Trump had planned to switch out the iconic blue and white paint job on the presidential jets for a bolder design, and proudly displayed a model of his Air Force One design in the Oval Office, but it is not clear whether the project will go forward now.

Trump was gone from the city before the other expected courtesies of inauguration morning would have begun. In recent times, those have included a morning visit at the White House between the outgoing first couple and the incoming one. The Trumps and the Bidens did not meet at all.

By the time Biden was sworn in at the Capitol, site of the attempted insurrection two weeks before, the defeated Republican was already in his new home state of Florida. Trump landed in West Palm Beach to blue skies, his adult children and others trailing him off the plane.

There were no formal greeters at the airport as is typical for a president, and he rode in a black SUV with American flags - not the armored limousine nicknamed "The Beast."

Supporters and a few protesters lined the road to Palm Beach and Trump's home at his members-only Mar-a-Lago Club.

Some had Trump-Pence 2020 flags. Signs included "We Love You 45." Reporters traveling with him also spotted a "You're fired" sign.

Trump's motorcade slowed repeatedly as it passed groups of supporters, apparently so Trump could take in the support and wave.