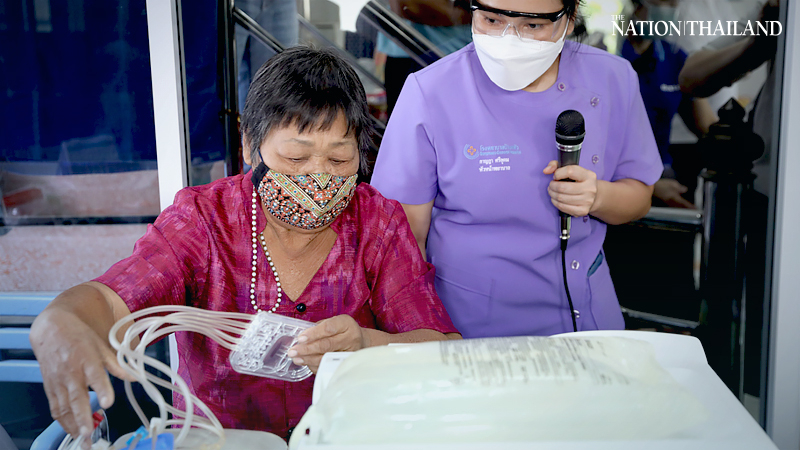 At the beginning of 2021, Automated Peritoneal Dialysis (APD) was added to the Universal Coverage Scheme (UCS) to improve the quality of life for patients living with chronic kidney disease.

Manee Paintanphol, a patient at Ban Phaeo Hospital in Samut Sakhon, is the first UCS beneficiary to receive APD – a treatment for kidney failure, which uses an automated cycler to fill the patient’s abdomen with dialysate before draining it into a sterile bag. This process is called “exchange”.

For two years she had been undergoing the Continuous Ambulatory Peritoneal Dialysis (CAPD), which was a burden as she had to do the exchange four times a day, between 6am and 11pm. She also had to change five to six bags of dialysate during the process.

The treatment made her feel worried and restless.

“Sometimes I fell asleep before 11pm, as I’m old and my health is not so good. Sometimes I missed the exchange, which made my belly swell up,” she said.

Manee’s struggles were noticed by her doctor, who then suggested she register for APD with the UCS.

When she began using APD earlier this year, she was able to sleep through the night and only had to change two bags of dialysate per day.

“The doctor set the machine up for me. All I have to do is press the green button and change the dialysate bags,” she said. “Now I can sleep better and feel stronger.”

Dr Piyathida Jungsaman, a kidney specialist at Ban Phaeo Hospital, said APD suited patients who have used CAPD for a long time and their abdominal lining has weakened, requiring them to increase the amount of dialysate.

APD is also good for patients with kidney failure who cannot be treated via haemodialysis due to their health and financial condition.

Sakchai Kanjanawatana, secretary-general of the National Health Security Office (NHSO) which oversees the UCS, said CAPD has been provided to UCS beneficiaries for 14 years now, allowing patients with final-stage kidney disease to survive.

APD has been available for beneficiaries of the Social Security Scheme and the Civil Servant Medical Benefits Scheme before it was added to the UCS benefits package early this year.

NHSO aims to provide APD to at least 100 patients this year. So far, 173 patients have registered for the system, and doctors from 20 healthcare units nationwide have expressed interest in obtaining APD for their patients.