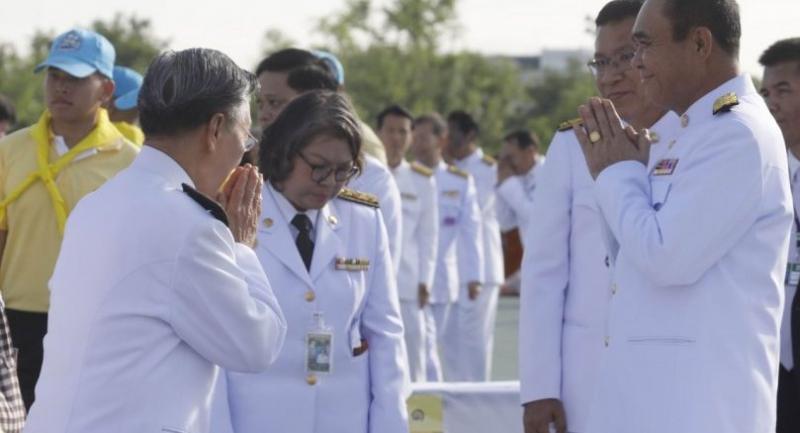 Prayut sees no need to show vision to Parliament

GENERAL Prayut Chan-o-cha yesterday resisted growing pressure on him to address Parliament at a joint meeting of the lower and upper houses tomorrow when members will vote to select the next prime minister.
Politicians, particularly those from rival political parties, have called on Prayut to speak before the gathering about his vision for the country if he is picked as prime minister again.
Five hundred MPs and 250 senators will be voting for the next prime minister.
However, the prime minister and head of the junta yesterday said the voting in Parliament was a matter only for parliamentarians.
“This voting is a process for Parliament. I have nothing to do with it. And there’s no need for me to show my vision. Also, the law does not require me to do so,” Prayut said.
He added that over the past five years in office, he had already made his vision publicly known on many occasions.
When asked by a reporter if he would show up at the Parliament meeting tomorrow, Prayut responded: “What does the law say? Your question is so irrelevant.”
Prayut, who led the 2014 military coup to overthrow an elected government, is the lone prime ministerial candidate of the Phalang Pracharat Party, which is in the process of putting together a majority in the House of Representatives to form a coalition government. However, Prayut is not an MP as he did not contest the March 24 general election.
The law prohibits any member of the ruling National Council for Peace and Order (NCPO) from contesting the election. The Constitution states that in the first five years after the first post-charter Parliament is established, senators are empowered to vote along with MPs to select the prime minister.
Support from a majority of both Houses is required for any PM candidate to become government head.
General Prayut is seen as having a huge advantage over other PM candidates as all 250 senators were appointed by the NCPO headed by him.
Meanwhile, Prachachart Party leader Wan Muhammad Noor Matha yesterday said PM candidates like Prayut should appear before Parliament at its meeting tomorrow.
“This is a way to show respect to the elected representatives. He has to find free time to show up, otherwise he should not have offered himself to become prime minister,” Wan Muhammad Noor said.

Neither required nor prohibited
The politician, a former House speaker, also said that although it was not required by law or any parliamentary regulations, PM candidates addressing Parliament about their vision is also not against any law.
“No rules against it does not mean you are prohibited from doing so,” he said.
Yesterday, House Speaker Chuan Leekpai said PM candidates have the right to choose whether to show up during the parliamentary meeting or not.
“The law does not prohibit” such appearances, he said.
Chuan, who is the Democrat Party’s chief adviser, also said the PM candidates might request time to address the meeting about their visions when becoming prime minister. The speaker said he would allow parliamentarians to debate without time limits before the voting.
Phalang Pracharat leader Uttama Savanayana said yesterday that the party expected to form a coalition government under Prayut’s leadership before the Parliament voting.
“The goal is to have a democratic government to lead the country forward, as expected by the people,” he said.
Meanwhile, the Democrat Party’s executive board and MPs will decide today on whether to join a Phalang Pracharat-led coalition government, key Democrat figures said yesterday.
Deputy Democrat leader Nipon Boonyamanee said the executives and MPs still could not agree on whether to take part or not. He said the issue would be resolved today. Democrat leader Jurin Laksanavisit said yesterday that the party was still waiting for a decision from the coalition leader Phalang Pracharat on certain matters.