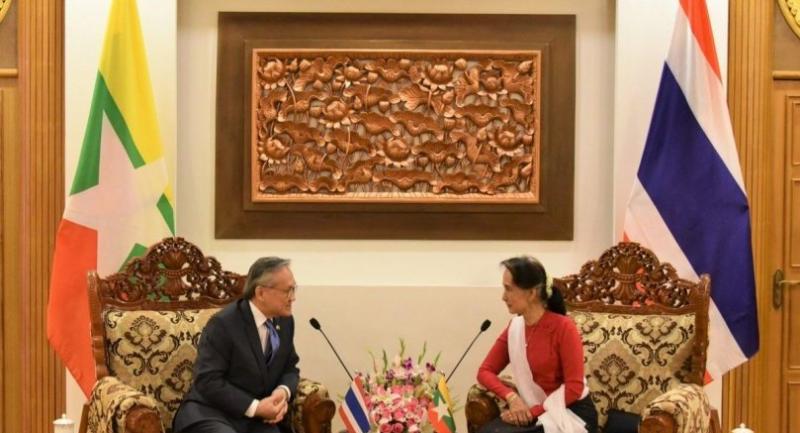 FOREIGN MINISTER Don Pramudwinai’s three-day visit to Myanmar will play a key role in strengthening the “natural strategic partnership” of the two countries, officials and members of the business community said.

Don was in Myanmar from Monday to Wednesday for the 9th meeting of the Joint Commission for bilateral cooperation, which he co-chaired with U Kyaw Tin, Myanmar’s Union Minister for International Cooperation.
In a meeting with State Counsellor Aung San Suu Kyi the commission raised a wide variety of issues to improve bilateral ties. The issues included economic and socio-cultural cooperation, protection of Myanmar workers in Thailand, improving connectivity along the border, building villages in Rakhine State to support Myanmar’s efforts for regional development, improving people-to-people contacts, fisheries cooperation and supporting the establishment of vocational schools to help build the capacity of Myanmar workers.
“As this year marks the 70th anniversary of Thai-Myanmar diplomatic ties, we are committed to enhancing cooperation with our Thai counterparts in developing alternatives to poppy cultivation. We believe it will drive the socio-economic development of the Thai-Myanmar border areas and improving the standard of living,” Sai Tun Nyo, deputy permanent secretary of Myanmar’s Ministry of Border Affairs, said.
He seems really impressed with Thailand’s projects to develop alternatives to opium production, particularly those implemented by the Mah Fah Luang Foundation. Myanmar authorities have been working on a pilot project to offer substitutes for opium production since 2016 and Thailand has been sharing its knowledge and expertise with them, he said.
After the meeting, Don signed a revised Air Services Agreement with Thant Sin Maung, Myanmar’s Minister of Transport and Communications and witnessed the signing of a memorandum of understanding on shrimp culture development in Rakhine State. The MoU was signed by the director-general of Thailand’s International Cooperation Agency and the director-general of Myanmar’s Department of Fisheries, a Foreign Ministry press statement said yesterday.
Meanwhile, the revised aviation pact, replacing the one signed in 1969, will help improve links between the nations, Ye Htut Aung, deputy director-general of the Department of Civil Aviation, explained.
The new agreement will help improve routes and the frequency of airline services between the two countries, the official said. He foresees more direct air links between different cities of both countries in the near future.
In addition, Aung Soe, director-general of Myanmar Trade Promotion Organisation, said the two sides had agreed to double bilateral trade volume by 2022. He said he foresees higher border trade over the next three years, thanks to the Initial Implementation of Cross-Border Transport Agreement.
In order to promote seamless connectivity both sides plan to open the second Friendship Bridge across the Moei/Taungyin River at the earliest opportunity and look forward to an early conclusion of the MoU on the Initial Implementation of Cross-Border Transport Agreement (IICBTA), the press statement said.
Businesses in Myanmar also considered Don’s visit a major step for closer ties with their Thai counterparts. Ye Htut Naing, president of the Tanintharyi Region Chamber of Commerce and Industry, said the authorities of Kanchanaburi and Prachuap Khiri Khan provinces voiced their eagerness to build two sister cities – between Dawei and Kanchanaburi and between Myeik and Hua Hin.
“Since the beginning of this year, we are aware of rising interest from the Thai side to cooperate with our [Tanintharyi] region, as we share a long border with Thailand. The quicker we sign agreements on sister cities, the more beneficial it will be to locals and businesses in both countries,” Ye Htut Naing said.
Fifteen representatives from the chamber will discuss bilateral economic cooperation at a meeting in Hua Hin later this month, he added.