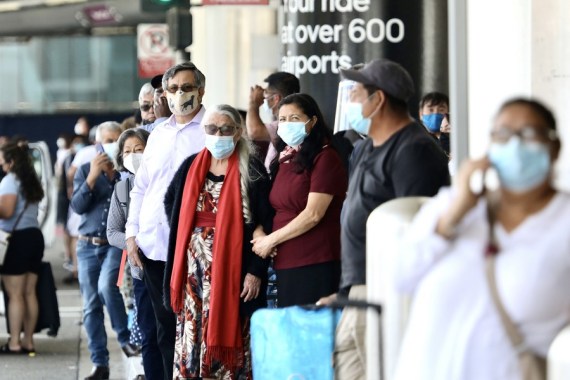 "Id expect a lot of resistance this time around. Weve hit a point where over half the population has been vaccinated and many of these folks are not going to just grin and bear it again because delta is spreading largely among and because of unvaccinated people," said Christopher Galdieri, a political scientist at Saint Anselm College.

The mask issue was heatedly debated at the high point of the pandemic in the United States in 2020, and later subsided as a large part of the nation got vaccinated. But now, the debate has been re-ignited.

The U.S. Centers for Disease Control and Prevention (CDC) on Tuesday recommended that vaccinated people wear masks indoors, if they live in regions of rapid COVID-19 spread amid the transmission of the more contagious Delta variant.

The recommendation has sparked much controversy, as it highlights a sharp shift from the agency's position since May that vaccinated people do not need to wear masks in most indoor spaces.

Many Americans also worry that this will undermine people's faith in vaccines, at a time when millions still refuse to get the jab.

Some areas have returned to requiring masks indoors, such as Los Angeles, which has re-instituted a mask mandate amid a surge in cases.

But in other cities, the debate over the issue got heated up. In St. Louis, in the state of Missouri, the state's attorney general is suing the city for requiring people to wear masks indoors in public places.

Nearly 40 maskless House Republicans on Thursday protested the mask mandate by walking to the Senate, where masks are not mandated by Capitol physician.

The final decision on whether to implement mask mandates lies with U.S. states.

Many Americans are reluctant to wear masks again, and contend that the Delta variant is only a threat to those who refuse to get the jab.

Dianne Wilson, in her 40s and a manager in a small company outside Washington DC, told Xinhua she does "not want to wear" a mask, as she has been vaccinated.

The Delta variant has quickly grown from less than 1 percent of cases in May to more than 80 percent now, said the CDC on its website.

Delta variant spreads about twice as easily from one person to another than the previous strains of the virus, according to the agency.

Most transmissions happening around the country are among unvaccinated people and in areas with low vaccination rates.

About half of Americans have not been vaccinated yet, U.S. top infectious disease expert Anthony Fauci warned on Sunday.

Brookings Institution Senior Fellow Darrell West told Xinhua there are "likely to be mask mandates in a number of places around the country."

"States and localities are imposing them to slow the spread of the Delta variant and help protect the unvaccinated. Conservatives are reluctant to do this but those are the areas seeing the greatest increase in COVID cases," West said.

Christopher Galdieri, a political scientist at Saint Anselm College, said it is possible the United States will see a mask mandate like those seen last year, but there could be a lot of pushback.

"I'd expect a lot of resistance this time around. We've hit a point where over half the population has been vaccinated and many of these folks are not going to just grin and bear it again because delta is spreading largely among and because of unvaccinated people," Galdieri said.