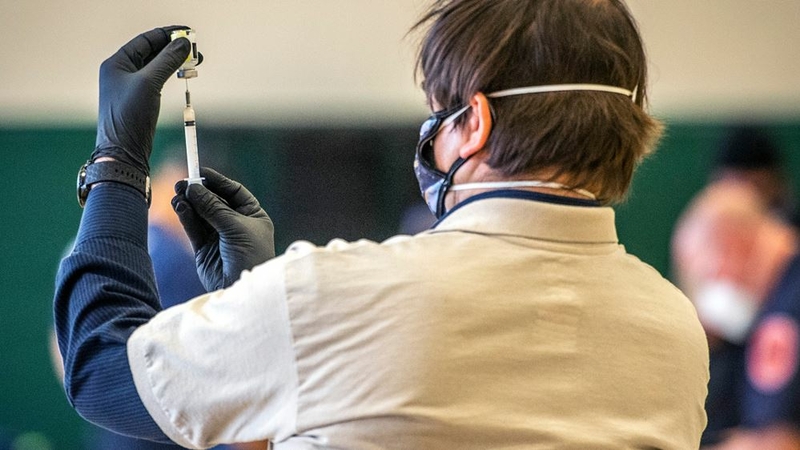 WASHINGTON - The U.S. government's top infectious-disease doctor, a leading drug regulator and the Health and Human Services secretary are dismissing suggestions that the second shot of authorized coronavirus vaccines could be delayed to make more doses available faster to more people.

In recent days, some public health experts have debated whether it is worth taking a scientific gamble by altering the two-dose regimen that proved highly effective in trials to maximize the number of people partially protected with at least one shot as the pandemic surges.

The debate is playing out as the United States struggles with administering the doses it already has. Nearly 18 million doses of vaccine have been distributed, according to Centers for Disease Control and Prevention data updated Monday morning; about 5 million have been administered.

Last week, the United Kingdom decided to prioritize giving a first dose of its authorized vaccines - even if it meant there was not enough to give people a booster shot within the recommended three to four weeks. U.K. authorities have said people could wait as long as 12 weeks for a second shot.

Limited data suggests that a single shot affords some protection against the coronavirus-caused disease covid-19, but it is not known how complete or long the protection lasts. The first shot of the Pfizer-BioNTech vaccine was 52% effective in the three-week interval before people received the booster shot. U.S. officials have said repeatedly that while it is worth evaluating whether different dosing regimens make sense, such a strategy is not supported by scientific evidence.

"There really are no data on what happens if you delay the second dose by three months or four months or two months," Anthony Fauci, director of the National Institute of Allergy and Infectious Diseases, said Monday. "We don't have any idea what the level of protection is and what the durability of protection is. It's fraught with some danger when you're making a decision about the regimen you're going to use when you don't really have a considerable amount of data."

"We're holding in reserve that second dose, because we believe we need to go according to what the FDA said is the safe and effective way to use these vaccines," Health and Human Services Secretary Alex Azar told "Good Morning America."

"We always said that these vaccines will be developed on the basis of science and all decisions will be made transparently on the basis of data," Slaoui said. "Changing the decisions made . . . without any data I think would not be responsible."

Peter Marks, director of the Center for Biologics Evaluation and Research at the Food and Drug Administration, warned in a statement that use of a single dose of vaccine from Pfizer-BioNTech and Moderna could give people a false sense of security.

"If people do not truly know how protective a vaccine is, there is the potential for harm because they may assume that they are fully protected when they are not and alter their behavior to take unnecessary risks," Marks said.

Others argued that because of the severity and persistence of the pandemic, the strategy of holding in reserve a second dose to ensure that people get their booster shot on time is too conservative. The first shot trains the immune system to recognize the novel coronavirus, but the second is necessary to muster a full response, solidifying the immunologic memory that was more than 90% effective at preventing illness in clinical trials.

"My feeling is that we're better off giving people one dose and hoping we'll get a second dose than holding back a second dose," said Walter Orenstein, professor of medicine at Emory University and scientific advisory board member of Moderna. "It's one of those things where it's much nicer to be a historian and look backward."

Jennifer Beam Dowd, associate professor of demography and population health at the University of Oxford, said she was initially surprised by the British decision to allow people to defer shots, but she likened the policy positions to wartime decisions.

"To me, it's very compelling, giving the first doses to more people as soon as possible, given this exponential growth we're seeing in a lot of places," Dowd said. "Under reasonable assumptions, that would save a lot more lives and hospitalizations and prevent more severe disease than doing the complete course on half the number of people in the next three months or so."

Pfizer spokeswoman Jerica Pitts said in a statement that the company's vaccine appears to confer some protection as early as 12 days after the first dose, but that there is not data on whether protection is sustained beyond three weeks with a single dose.

"While decisions on alternative dosing regimens reside with health authorities, Pfizer believes it is critical health authorities conduct surveillance efforts on any alternative schedules implemented and to ensure each recipient is afforded the maximum possible protection, which means immunization with two doses of the vaccine," Pitts said.

Fauci said there was scientific interest in the possibility that two half-doses of the Moderna vaccine might be effective in adults ages 18 to 55 based on evidence from an early clinical trial in which 150 people in that group received half a dose and had similar immune responses as the group given the full dose.

But, he said, regulators would have to decide whether that evidence was compelling, and "right now, I don't think there's a need to do that at this point, because you've got to ask yourself: What is the problem, and our problem is efficiently getting doses we already have into people."

Moderna spokesman Ray Jordan declined to comment on the use of the vaccine beyond the conditions in its emergency authorization. "At this point we wouldn't have any further information to share about any potential ongoing regulatory discussions," Jordan said.

Paul Offit, a vaccine expert at Children's Hospital of Philadelphia and a member of the external advisory committee to the FDA, called changes to the dosing regimen without more evidence "terrible ideas."

"We did a Phase 3 trial which taught us that two doses of Pfizer's or Moderna's vaccine induced excellent, high-level protection against disease. We don't know whether a half-dose would do that; we don't know if a single dose would do that," Offit said. "When people get on TV and say, 'Don't let the perfect be the enemy of the good' - we shouldn't let the unknown be the enemy of the known."

Asked their views on the idea of a single dose, the transition team for President-elect Joe Biden did not answer with specifics. However, a transition official, speaking on the condition of anonymity because of the absence of a solid policy, said the incoming administration will follow the guidance of medical and scientific experts. If experts' recommendations about the number or pace of doses were ever updated, the official said, the Biden team would update the public on such guidance.

More vaccines are being manufactured, which will increase the supply - and the pressure to get distribution systems up and running. But the early months of this year could yield developments paralleling those in December, when the first two coronavirus vaccines, from Pfizer-BioNTech and Moderna, were granted emergency authorization.

The one-shot Johnson & Johnson vaccine trial is fully enrolled and expected to report results by the end of the month, with an application for emergency authorization possible next month. The AstraZeneca-Oxford trial is ongoing in the United States. Slaoui recently said the AstraZeneca vaccine could be available in the United States in April. A 30,000-person trial of a shot from Novavax vaccine began last week.