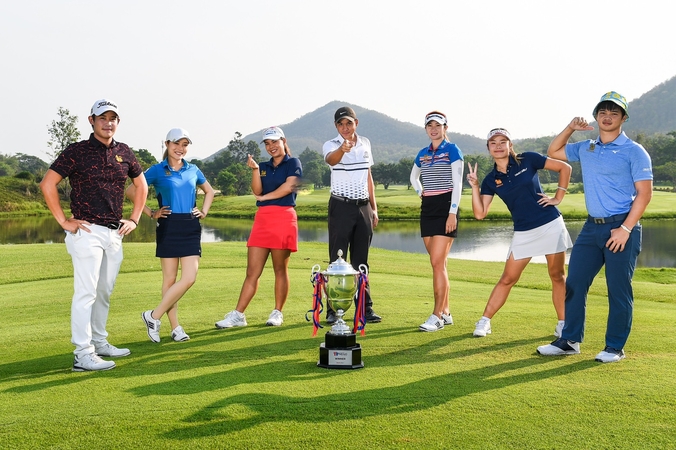 A field of 128 male and female golfers will battle for the winner’s cheque of Bt450,000 when the Bt3-million Thailand Mixed II hosted by Trust Golf tees off on Thursday (April 15) at the hilly Alpine Golf Resort.

The battle of the sexes featuring 80 men and 31 women will rage from April 15-18 under a strict Covid-19 bubble policy.

The Alpine course measures 7,200 yards off the men’s tees and 6,163 yards off the women’s. After 36 holes, the top 60 players will proceed to the weekend rounds.

Thailand Mixed I champion Arpichaya Yubol will attempt to make it two wins in a row. The Saraburi-based player beat Atthaya Thitikul by one stroke in February and will tee off on Thursday in a group with Suteepat Prateeptienchai and young gun Amarin Kraivixien, winner of the Thailand Development tour in Nakhon Nayok two years ago.

Atthaya meanwhile will tee off alongside former Singha Masters winner Phachara Kongwatmai, who is playing his first event after suffering a car accident earlier this year, and Settee Prakongvech, who finished third and the best male player in the inaugural edition in Hua Hin.

Former Boonchu Ruangkit Championship winner Itthipat Buranatanyarat will be among the men attempting to prevent a repeat of the female domination that saw four women finish in the top five in Hua Hin.

“It all comes down to who has better putts. Once on the greens, we are all equal. As for myself, I have prepared well coming to this tournament,” said Itthipat, who will play alongside Chorphaka Jaengjit and former Asian Tour champion Chapchai Nirat.

Chiang Mai-based Thaya Limpipolpaibul will try to claw back his confidence at this home tournament after missing the cut on the PGA Thailand tour last week in Nakhon Nayok.

“Though I grew up in Chiang Mai, I haven’t played on this course much. The grass is a bit fast. I need to hit the fairways to set myself up in a good position to shoot scores this week,” said Thaya, who is still looking for his maiden title. He will compete in the same group as Jakraphan Premsirigorn and Phannarai Meesom-us.