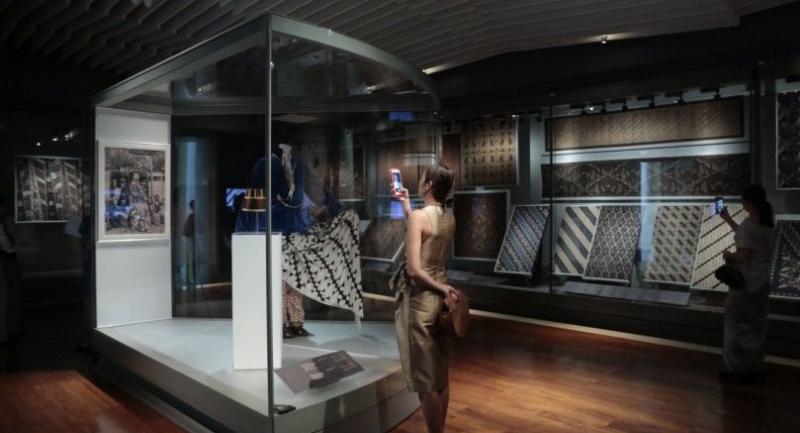 The batik collection of King Chulalongkorn from the central Javanese principalities of Yogyakarta and Surakarta allures with distinctive shades of blue and brown and even some “forbidden motifs” reserved for the nobility.

KING CHUALONGKORN returned from each of his three visits to Java between 1871 and 1901 with warmer bonds to the Dutch who controlled the land that became Indonesia – and also with 307 samples of batik redolent with imagery of Javanese culture.

Now that private collection of King Rama V, which has been stored in the Treasury of the Inner Court of the Grand Palace since his death in 1910, is being publicly displayed for the first time.

The exhibition “A Royal Treasure: The Javanese Batik Collection of King Chulalongkorn of Siam” will remain on view at the Queen Sirikit Museum of Textiles until the spring of 2021. The batik collection of King Chulalongkorn from the central Javanese principalities of Yogyakarta and Surakarta allures with distinctive shades of blue and brown and even some “forbidden motifs” reserved for the nobility.

Space limitations mean the displays will be rotated throughout the course of the exhibition. To begin with, there are 37 pieces to see, including sarung, a short, tubular hip wrap; kain panjang, a longer hip wrap; ikat kepala, a head cloth; and examples of batik patterns called contoh pola.

Museum curator Sarttarat Muddin says the facility received permission from His Majesty the late King Bhumibol in 2014 “to research and exhibit this extraordinary collection”.

“It took almost four years to do the research and prepare the show because batik is not our typical textile and the patterns in this collection are quite different from what Thais wear in the South,” she says. The varieties of batik designs in shades and motifs reflect multicultural societies of Java’s north coast and west.

Sarttarat and co-curator Dale Carolyn Gluckman visited Indonesia several times to meet experts at the Jakarta Textile Museum and also went to the Tropenmuseum in Amsterdam to see its trove, which is believed to have originated at the same workshop in Yogyakarta where much of the royal collection was produced.

King Chulalongkorn was only 18 when he made his first and only official visit to Java in 1871 – the first time a reigning Siamese monarch had ventured outside the country. He was exploring ways to modernise Siam with Western innovations, such as the railway connecting Batavia (present-day Jakarta) with Semarang in Java.

He spent 15 days visiting both these places. Semarang was an international trading port where Carolina Josephina von Franquemont ran a batik atelier that produced hybrid designs with geometric shapes in vertical panels and pictorial subjects that became standard features of coastal batik. The King returned with five samples.

Sarttarat points out the Garden of Eden imagery with grapevines and a snake on a tree branch, a Chinese butterfly motif signifying longevity and love, and a centipede symbolising protection. The batiks from Carolina Josephina von Franquemont workshop in Semarang

King Chulalongkorn’s returns to Java in 1896 and 1901 were unofficial visits. On the earlier stay, convalescing after an illness, he toured Yogyakarta, Surakarta, Cirebon, Indramayu and Garut among other cities, producing the memoir “A Journey of Over Two Months to Java”.

“There is no better way to recover than going to a new, peaceful place away from problems,” he wrote. “It was a good opportunity to make new friends because Java is like visiting a neighbour. Social contact is good for both countries.”

It’s presumed he acquired at Banyamas in Central Java two pieces of batik in deep red and dark blue, from the workshop of Catharina Carolina van Oosterom, which feature more geometric shapes along with jamblang fruit and Art Nouveau motifs. A batik sample from Lasem, also in central Java, boasts a unique red hue and patterns heavily influenced by Chinese culture, the town having been the landing point for Java’s first ethnic Chinese settlers.

Sarttarat notes the tigers, a phoenix, a unicorn with a dragon’s head and a lantern within the pattern and the Western lace-like effect along the bottom.

“The distinctive red dye comes from rak yor [the root of Morinda citrifolia] and from the minerals in the water only found in Lasem,” she says. A batik from Lasem presents Chinese landscape of plants and birds and butterflies in great delicacy.

Pekalongan on the north coast had workshops producing batik in different styles, this being a melting pot of Javanese, Chinese, European and Muslim settlers. King Chulalongkorn didn’t visit Lasem or Pekalongan but probably acquired samples of their art in the city of Bandung.

Sarttarat explains that AJF Jans, the Dutch owner of a workshop in Pekalongan, was among the first to sign batik and the royal collection has several pastel-coloured batiks marked “J Jans”, mingling Western notions such as floral bouquets, bows, cupids and wreaths. The batik designs from Pekalongan and Garut reflects muticultural societies.

Garut in West Java was famous for gumading, a pale-yellow ground colour, that is said to resemble the flesh of an almost ripe mango and the design elements such as garuda’s wing reflects the influence of central Javanese courts.

Batiks from Surakarta were typically yellow-brown or dark blue with tiny motifs, while those from Yogyakarta were predominantly chocolate brown or lighter blue.

Favourite motifs in the Surakarta court were elephants representing royal power and semen – stylised flora and fauna – a name derived from semi, meaning “to sprout” or “grow”. In Yogyakarta, bolder geometric patterns were preferred, as were designs inspired by Hindu cosmology – phra sumeru, garuda and naga. Batiks from Surakarta were characterised by yellow-brown and dark blue.

“The designs also reflect the long and complex cultural and political history of Java,” says Sarttarat. “There were forbidden motifs that were exclusively reserved for the nobility, such as udan liris and parang rusak [a sword-like pattern].”

The royal collection has 43 pieces from Yogyakarta produced by the Lawick van Pabst studio His Majesty visited in 1896 and again in 1901. The pieces are technically superb, with crisp patterns drawn in wax on both sides of the cloth and with exceptionally deep yet bright natural indigo and warm saga brown.

Some of the batiks brought back were tagged in Thai, English and sometimes Dutch, indicating the origin, pattern name, price and function. Some are hand-signed “W v Lawick v Pabst”. The royal collection has 43 pieces of Yogyakarta batik produced by the famous Lawick van Pabst atelier, which His Majesty visited in 1896 and again in 1901.

Shortly after the King’s 1896 visit, the Dutch government asked Pabst to create 175 patterns for the Dutch colonial pavilion at the 1900 Paris World Exhibition. Most of these are now stored at the Tropenmuseum.

“We went to Amsterdam to compare our Pabst pieces with those of the museum and found its sampling size to be 100x100 centimetres, whereas most of ours are sarung and kain panjang ranging from 100 to nearly 300cm, with full patterns that are extremely valuable,” says Sarttarat.

The exhibitions includes videos made from vintage films, including the state visits of King Prajadhipok in 1929 and Their Majesties King Bhumibol and Queen Sirikit in 1960. One kain panjan batik even features a “Sirikit pattern” – named for the Queen. The Sirikit batik pattern from Yogyakarta was named to honour Her Majesty Queen Sirikit during her state visit with His Majesty King Bhumibol in 1960.

“President Sukarno asked an artisan to create a highly crafted batik with special pattern dedicated to the Queen and presented it to her as a gift,” Sarttarat explains. “The floral pattern probably represents the beauty of the Queen and it’s now one of the batik designs available on the market. What we have on display isn’t the one presented to the Queen – we received this one from the Sekar Jaged Batik Association of Yogyakarta.” Visitors can try on Javanese costumes in varied batik patterns.

Visitors to the exhibition can also get hands-on with batik, take selfies in front of a photographic display of the seven cities where King Chulalongkorn’s batiks originated, and try on various Javanese batik costumes.

A WHIRLWIND OF PATTERNS

“A Royal Treasure: The Javanese Batik Collection of King Chulalongkorn of Siam” continues until May 2021 at the Queen Sirikit Museum of Textiles within the Grand Palace compound in Bangkok.

Respectful attire is required – no shorts or flip-flops.