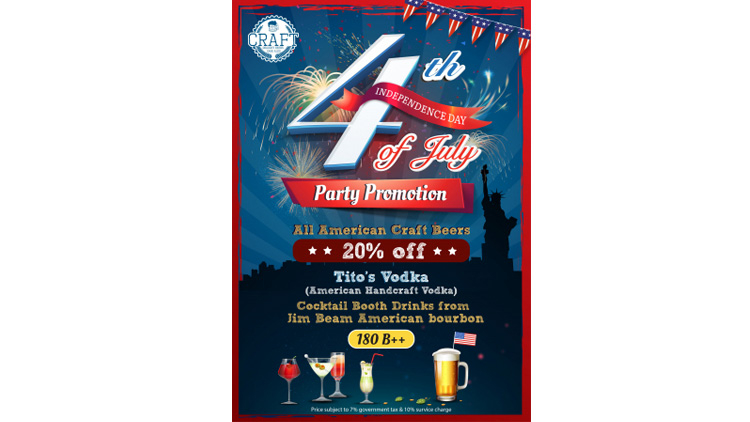 US Independence Day comes around again this Thursday (July 4) and Craft Sukhumvit Soi 23 is marking the occasion by offering 20-per-cent off all American craft beers and Americans bourbon from 11.30am until late. Game for a laugh

Or you can choose to celebrate Independence Day with an all American comedy showcase and traditional 4th of July-style BBQ at the “Comedy Cook-out!” being hosted by the Clubhouse Sports Bar & Grill on Sukhumvit Soi 23.  Taking to the stage are comedian Stevo Joslin, co-founder of the Comedy in Cambodia scene which has re-invented standup comedy in Cambodia and spawned some of the best comedy events in Asia, and Chris Raufeisen, co-founder of Raw Comedy, a 2018 Magners Comedy Competition finalist and two-time winner of “Fight Night” new material comedy competition in 2018 and 2019.

Special guests include Magners Comedy Competition 2018 finalist and crowd favorite Jackson Foshay. The fun starts with a buffet of burgers, dogs, chilli and more. Doors open at 6.30pm, the buffet is served from 7pm and showtime is 8pm. Advance tickets are priced at Bt500 and Bt700 at the door. Bt300 in advance and Bt500 at the door will be charged for those who want to watch the show only.  Book your seat at (02) 6641376 or visit Facebook.com/theclubhousebangkok A presence on the stage

Budding thespians of any nationality, meanwhile, should go along to Bangkok Community Theatre’s July Club Night, which features a workshop on “How To Build a Character: by actor Severin Herbert, who is fresh from his onstage success as Malvolio in BCT's production of “Twelfth Night”. Participants can look forward to exploring different techniques and the process one can follow when creating a role. The workshop will be held on Thursday (July 4) night at 7 at Bistro 33, Sukhumvit Soi 33. Please dress comfortably for this participatory event. It’s free for BCT members and Bt100 for everyone else. Make a reservation by emailing to [email protected]