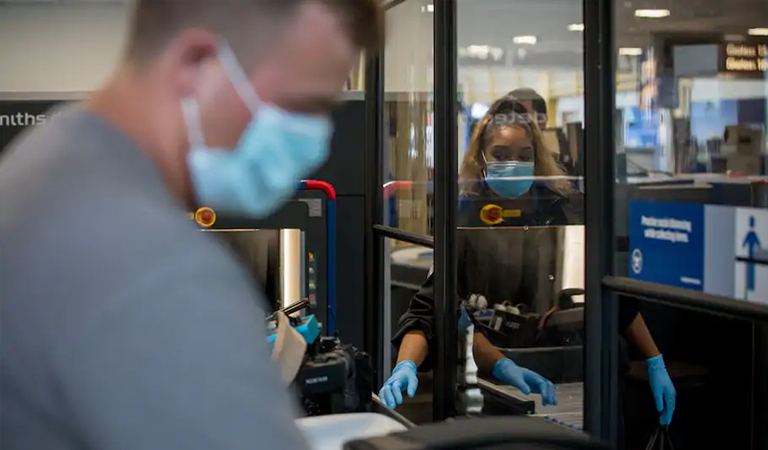 The report Thursday by a team at the T.H. Chan School of Public Health focused on the curb-to-curb portion of the journey, assessing the risks travelers might face from the time they arrive at the airport until they land at their destination and claim their bags.

It is part of a growing amount of research, some of it funded by the aviation industry, that airlines hope will convince the public that air travel is safe as long as proper precautions are taken.

Federal health officials still continue to urge people to avoid travel. Researchers said even though their report found airports and airlines have taken steps to reduce the risks that someone will catch the coronavirus, there are no guarantees.

"To be clear, we are not saying that it is safe to fly," said Leonard Marcus, founding co-director of the National Preparedness Leadership Initiative, a joint program of the Harvard T.H. Chan School of Public Health and the Harvard Kennedy School of Government, during a briefing with reporters. "As efforts to overcome the covid-19 crisis continue, there are risks to any activity in public spaces."

However, he said, for those who do need to travel, measures taken by airports "do significantly reduce the risk of contracting the virus."

The report is the second of two done as part of the Aviation Public Health Initiative. The first, released last fall, examined the risk of disease transmission aboard aircraft. They are funded by a consortium of aviation groups, led by Airlines for America, an airline trade group. Despite the connection, Marcus said researchers were given "independence in conducting our research and reaching our findings."

In both, researchers emphasized the importance of wearing masks at all times.

Researchers suggested that airports consider limiting eating and drinking in spaces where large numbers of travelers gather to reduce the chance of infection.

"If passengers unmask to eat and drink in crowded areas, virus-emission rates could increase," researchers said.

If such a ban is not possible, steps should be taken to improve air circulation, the study said.

As part of their work, the Harvard team surveyed 25 airports of various sizes and performed their own modeling of air quality in those settings, taking into account the most current research on how the virus is transmitted and how it can best be mitigated.

They found airports already have put into place many of the strategies recommended by public health experts, including installing clear barriers to reduce person-to-person contact at ticket counters, retail and restaurant counters and security checkpoints, as well as more frequently cleaning spaces where larger numbers of travelers congregate.

"Airports have made concerted efforts to reduce the risk of covid-19 transmission," said Wendy Purcell, a research associate in the department of environmental health at the Harvard Chan School.

She cited one airport that estimated it had installed two miles of clear physical barriers, 500 hand sanitizing stations and 5,000 floor decals to remind travelers of the importance of social distancing. Others, in conjunction with airlines, have adopted technology that enables people to check in for a flight, check their luggage and obtain a boarding pass with almost no human contact, she said.

Yet even as airports have taken aggressive steps to keep travelers safe, they are battling a virus that continues to mutate in ways that make it more contagious and possibly more deadly, researchers said.

The study's release comes as public health officials are weighing additional strategies to combat concerns about new variants that have begun circulating in the United States, including requiring those who fly domestically to be tested before they board their flights. The travel industry strongly opposes any domestic testing requirement.

International travelers already are required to show proof of a negative coronavirus test before they board U.S.-bound flights under a mandate that took effect last month. Those who refuse to be tested or who test positive aren't permitted to travel.

The Harvard team declined to comment on whether it thought domestic travelers should be tested before boarding flights. But in the report, it cited testing as key strategy for reducing the spread of infection.

"Viral testing is an important public health screening mechanism that can quickly and efficiently identify those with infections and stop them from undergoing activities that could expose others, including potential travel," the report said.

Another challenge airports face is upgrading their ventilation systems. Unlike airplanes, which are equipped with sophisticated air filtration systems, most airport systems are not. The study recommended that airports work with qualified HVAC engineers to determine how they can augment current systems, particularly in areas where travelers tend to congregate.