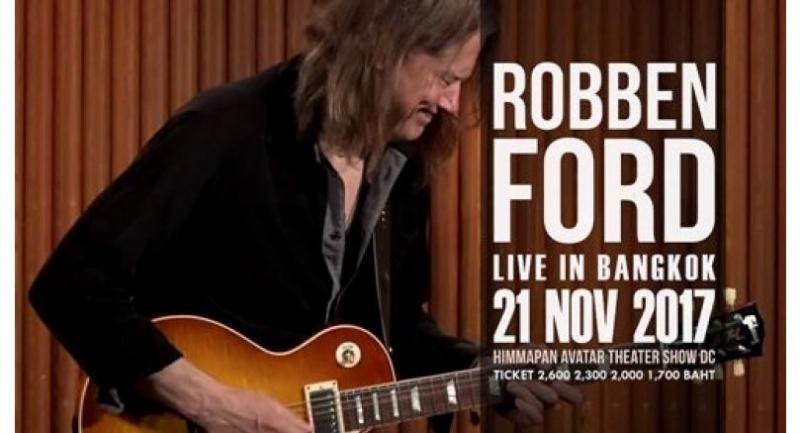 American rock, blues and jazz guitarist Robben Ford will be in Bangkok next month for a concert at the Himmapan Avatar Theatre on the fourth floor of Show DC, on November 21 at 8pm.

This Thailand concert is a part of the guitar virtuoso’s tour in Asia, which kicks off in China and takes him to Taipei and Tokyo.

The five-time Grammy nominee will be playing tracks off his new album, “Into the Sun”, which shines a bright light on his artful, contemporary songwriting and the stunning playing that’s made him a favourite foil of Miles Davis, Joni Mitchell, George Harrison and other legends.

Ford describes his 11-song set as “one of the top recordings I’ve ever done” – a staggering observation considering his extensive discography, which embraces more than 35 albums under his own name and with his various bands. There’s also Ford’s session and sideman work, which includes hundreds of concert appearances and albums by Bonnie Raitt, Barbara Streisand, Charlie Musselwhite, KISS, Ruthie Foster, Jimmy Witherspoon and Rickie Lee Jones.

The new album, which follows last year’s critically acclaimed “A Day In Nashville” and 2013’s “Bringing It Back Home”, explores the breadth of Ford’s sophisticated, visionary writing and playing, creating a new chapter in his brilliant musical history.

Tickets cost from Bt1,700 to Bt2,600 at Thai Ticket Major counters and online at www.ThaiTicketMajor.com.