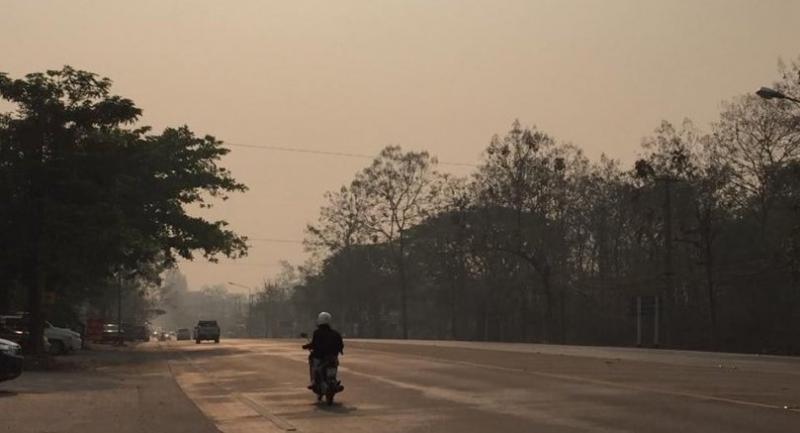 AIR POLLUTION from particulate matter smaller than 2.5 microns (PM2.5) continues to ravage the North and Northeast but no accurate measurements are available, as many provinces do not have PM2.5 monitoring stations.

As seasonal haze intensifies in the North from the accumulation of fine particulate matter in the air, a PM2.5 monitoring device in Khon Kaen yesterday indicated that air pollution was also occurring in the Northeast. However, the extent across the region is unknown as only Khon Kaen has a monitoring station.

According to Pollution Control Department (PCD) PM2.5 data, Khon Kaen had the worst PM2.5 daily average level outside the North region yesterday afternoon, with measurements at 82.46 milligrams per cubic metre of air and a peak of 132.17mg in the morning.

The situation in Khon Kaen was slightly better than in Chiang Mai, which had a daily average of 95.72mg and a peak of 112.39mg. The areas with the most serious situations were Tak’s Mae Sot district and Lampang’s Mae Moh district, which had daily averages of 127.05mg and 117.1mg respectively.

Although the PCD does not have other PM2.5 measuring devices in the Northeast, two other air quality monitoring stations in the region, in Nakhon Ratchasima and Loei, indicated that PM10 levels were relatively high and continuing to increase in recent days, which implied that PM2.5 levels were also high. Air Quality and Noise Management Division director Thalearngsak Petchsuwan said he had just become aware of the air pollution problem in Khon Kaen and admitted that the department still did not have enough PM2.5 monitoring stations.

“I do not expect Khon Kaen to also has the same problem with high PM2.5 levels, because the Northeast normally has relatively good air quality and no smog problems,” Thalearngsak said.

Currently, the PCD has 26 air quality monitoring stations that can measure PM2.5 in 18 of Thailand’s 77 provinces. Most of them are in the Bangkok Metropolitan area and Central region.

He said the PCD could not install PM2.5 monitoring stations in all provinces because the cost of installation and maintenance was expensive at Bt1 million per station.

However, Sanphet Chunithipaisan, a researcher with the Faculty of Engineering at Chulalongkorn University, has pioneered a pilot project to install local PM2.5 monitoring devices in Nan, with 95 tambons already having real-time monitoring devices.

Sanphet said his research team had developed small sensor sets to measure the amount of particulate matter in the air, which could assess the levels of PM10, PM2.5 and PM1 for a cost of only Bt30,000.

“People in Nan can get real-time, accurate air quality updates for their localities all the time using our portals on Twitter and Line,” he said.

“From our air quality records, we found that even in Nan, the PM2.5 levels varied from place to place, so we can conclude that a few PM2.5 stations in each region are not enough to accurately monitor the air quality situation.”