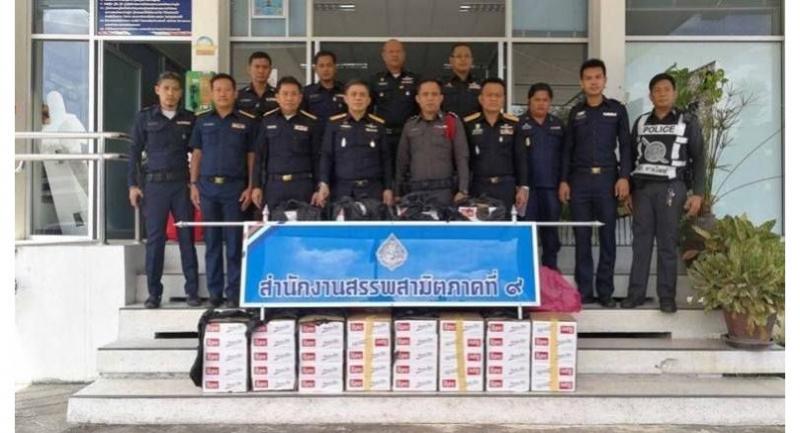 Illicit cigarette use in Thailand has more than doubled, costing the country at least Bt3.6 billion a year in lost tax revenue, a study by the major tobacco company says.

Philip Morris (Thailand) Limited [PMTL] revealed the findings of its study on Monday, which compared Q4 of last year with the same period in 2016.

The study, conducted by research house Nielsen, showed that non-domestic cigarettes, or cigarettes without a Thai tax stamp, rose to 6.6 per cent in Q4 last year, an increase from 2.9 per cent in Q4 of 2016.

The study found the problem is most widespread in the south, with the provincial incidence as high as 76.6 per cent in Satun, 67 per cent in Songkhla, and 40 per cent in Patthalung, said Pongsathorn Ansusinha, PMTL's director of corporate affairs.

From the 10,000 samples of discarded cigarette packs collected for the study, 669 packs (or 6.6 per cent) were found without Thailand’s tax stamp and were thus considered “non-domestic” cigarettes.

Two cigarette brands made up about half of these non-domestic samples, neither of which was registered with the Excise Department.

Pongsathorn said that after the excise tax reform in September 2017, the company anticipated legal cigarette consumption volume to undergo a significant reduction this year because some smokers can no longer afford to buy legal cigarettes. They would either quit smoking or turn to the roll-your-own tobacco or illicit cigarettes.

“By using the 6.6 per cent rate, we estimate the consumption of non-tax-paid cigarettes in Thailand could reach about 100 million packs. This could mean a loss of excise revenue of at least Bt3.6 billion per year, assuming excise tax of Bt36 per pack in 2018,” he said.

The amount could rise as the excise burden is set to rise again in October 2019, when all cigarettes would be subject to specific tax rate of Bt24 per pack plus 40 per cent ad valorem tax, he added.

Assuming the illicit cigarette use remained at 6.6 per cent, while the volume of legal cigarettes further contracts, the excise revenue loss could be as large as Bt5 billion per year in 2020, he said.

Pongsathorn urged the government to enforce laws, particularly the suppression and prevention of illicit cigarettes.