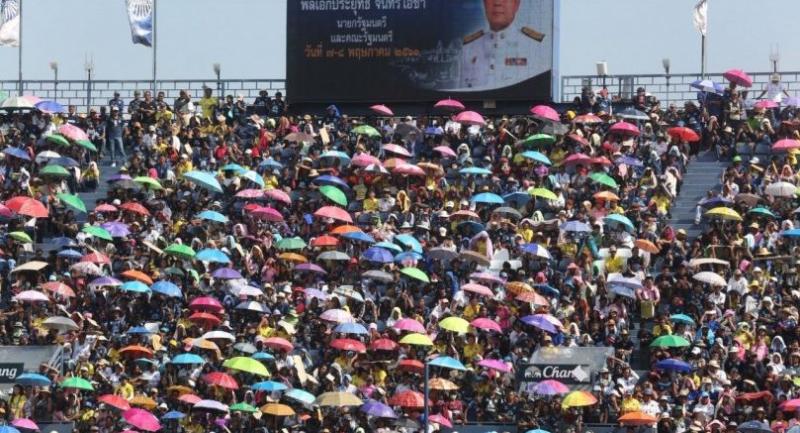 A huge crowd gathers at a Buri Ram stadium to welcome Prime Minister Prayut Chan-o-cha during his recent visit to the northeastern province.

At least 24 former MPs and senators in the North and Northeast have “shown their interest” in joining a pro-junta political party, according to a source familiar with the matter.

The source, who asked not to be named, said on Monday that the politicians were considering whether to defect to the Palang Pracha Rath Party, which is believed to support Prime Minister General Prayut Chan-o-cha for his possible return to power after the next general election.

Most of the ex-MPs and senators are from the northeastern provinces of Nakhon Ratchasima, Khon Kaen, Si Sa Ket, Ubon Ratchathani, Surin, Amnat Charoen, Nong Bua Lamphu, Maha Sarakham, Roi Et, Nong Khai, Nakhon Phanom, Kalasin, Bueng Kan, Yasothon, Udon Thani and Chaiyaphum, according to the source, while at least two are from the North – one from Chiang Rai and another from Mae Hong Son.

They are from a number of parties, including Bhum Jai Thai and the previously ruling Pheu Thai, which won most of its MP seats from the North and Northeast in earlier elections.

Pirom Pholwiset, a former Bhum Jai Thai MP for Nakhon Ratchasima who is expected to defect to the pro-junta party, said on Monday that he was going to join a new party that had a good strategy for solving the country’s problems and developing the country.

“The party does not rely on political financiers, unlike in the past,” the politician said, alluding to Palang Pracha Rath although he did not identify the party in question.

“I believe this party will certainly provide hope and can be relied on by the Thai people,” he added.