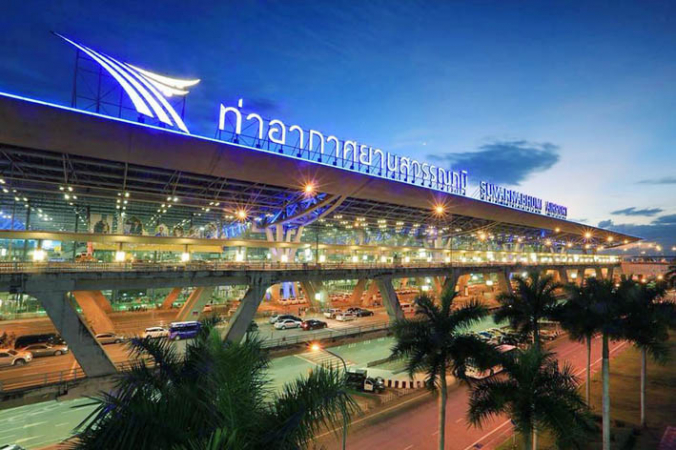 In response to celebrity English-language teacher Andrew Biggs complaining about the long queues at Suvarnabhumi Airport, the Immigration Bureau has clarified that it had already mobilised more personnel to facilitate immigration clearance.

On Wednesday, Biggs, the owner of Andrew Biggs Academy and co- director of andrewbiggs.com, an English language-learning website for Thais, posted a Twitter message: “Suvarnabhumi hell for tourists. Look at queues today. Never seen this long.”

The posts were made in Thai.

On Thursday, Biggs posted another Twitter message in Thai: “Suvarnabhumi is not hell but it is the gateway to our beloved Thailand. Yesterday, I was very dissatisfied with what I saw because I was worried about Thailand’s image in the eyes of foreign tourists who have just arrived. I would like to ask the authorities to consider this issue and I believe we could solve it.”

Later on Thursday, Pol Colonel Choengron Rimpadee, deputy commander of Immigration Police Division 2 and spokesman of the division, said he ordered an inquiry into the issue.

Choengron said their inquiry found that Biggs had got off a plane when 44 flights with 4,500 passengers arrived between noon and 2pm.

The spokesman said the Immigration Police Division 2 always mobilises all its immigration officers to be stationed at all counters in all zones to speed up clearance of arriving passengers when many flights arrive at the same time.

During rush hours, the immigration counters at Suvarnabhumi Airport could clear about 2,000 passengers within an hour, but the immigration officers also had to be on alert for foreign criminals trying to pass themselves off as tourists, and many passengers were not allowed to enter the Kingdom, Choengron added.

He said their inquiry found that Biggs had waited for about an hour to pass through an immigration counter.

He said Biggs used a Bus gate, coming by a bus from his plane to the arrival terminal at 1.01pm. He said Biggs started waiting in his queue at 1.06pm and he passed through the counter at 2:06pm.

Choengron said the hall where Biggs had waited for immigration clearance could accommodate some 500 passengers but some 20 flights arrived at nearly the same time and hence more than 1,200 passengers had to wait in queues in the hall, causing the lines to extend beyond the hall.

He added that officials managed to shorten the lines within 30 minutes.

He said all officers, including supervisors of the shift, were normally stationed at all counters to help speed up clearance, but sometimes supervisors had to leave their counters to solve problems of other officers and this might have prompted Biggs to think that the counters were vacant without officials, Choengron said.

He said Immigration Bureau acting commissioner Lt-General Sompong Chingduang had heeded Biggs’s messages and attached importance to the posts as they could affect the bureau’s image.

The spokesman added that the bureau had contingency plans to handle the overwhelming number of passengers arriving at the same time. For example, officials resting after their shifts are called in urgently to help, and volunteers are also called in to advise passengers on filling the immigration forms.

During rush hours priority channels are also opened for the disabled, young children, pregnant women and the elderly are also opened, Choengron said.

He said Thais and Hong Kong and Singapore citizens, who have registered online for the clearance process, can use the automatic clearance channels that take about 20 seconds. The bureau has plans to expand this automatic service for other nationals as well, he added.

He said the bureau had also consulted with the airport to deal with the increasing number of passengers, which increase by about 6 per cent each year. The bureau has recruited more personnel from police officers and outsiders to become immigration officers, and immigration officers who had requested transfers had been ordered to continue working until the end of Setpember, he added.

The spokesman said the bureau appreciated Biggs’s concerns and would invite him for consultation and his opinions would be referred to when the bureau consults with other concerned agencies on how to deal with long queues at the airport.