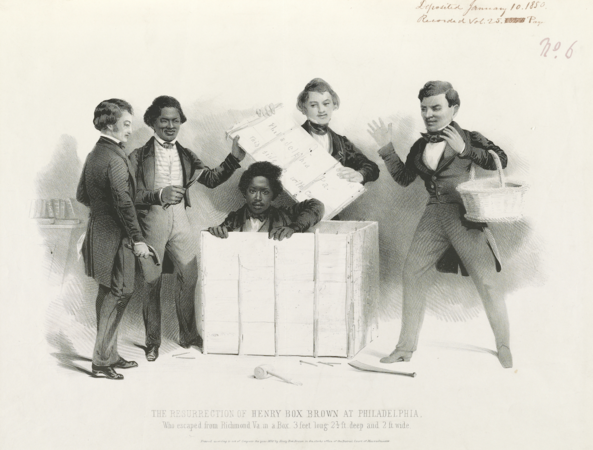 Henry "Box" Brown emerges from a wooden crate after mailing himself to freedom as several people, including abolitionist Frederick Douglass (holding a claw hammer at left) look on. MUST CREDIT: Library of Congress

Henry Brown had reached the nadir of his despair. The Virginia slave's pregnant wife and three children had just been sold away after their owner's effort to extort money from Brown to prevent the sale.

"My agony was now complete, she with whom I had traveled the journey of life in chains ... and the dear little pledges God had given us I could see plainly must now be separated from me forever, and I must continue, desolate and alone, to drag my chains through the world," recalled Brown in an account he wrote in 1849.

But that is not what Henry Brown did. Instead, he imagined a wholly original way to escape his misery.

He would mail himself to freedom in a box.

The plan - one of the most sensational slave escapes of the antebellum period - would later become fodder for Brown's art as an actor, magician, singer and hypnotist who toured the United States, Canada and England in the mid-19th century.

Although Brown's performances - which included re-enacting his boxed escape, disguising himself as an African prince, and hypnotizing white spectators - appalled sober-minded abolitionists, there was likely a method to his magic, said Martha Cutter, a professor of English and Africana Studies at the University of Connecticut who has researched Brown.

His antics could be viewed as "a way of trying to take control of this incredibly grave trauma of enslavement," said Cutter.

Brown, she said, "blows it up and plays with it."

In recounting his first few decades of life as an enslaved person in Louisa County, Virginia, and later Richmond, there's no sign of the outlandishly creative performer Brown would become. He hints at a possible reason: "They robbed me of myself," he wrote.

He had been born a slave, sometime around 1815, in Louisa County. After the farmer who owned his family died, the teenage Brown went to work at a tobacco factory in Richmond, where he was permitted to take a wife on a neighboring plantation.

Brown's wife, Nancy, was later sold to another slaveholder, who began blackmailing Brown into renting a house for Nancy and the children and making payments to keep him from selling the young family away. Finally, Brown could no longer meet the slaveholder's demands, and his family was sold to a plantation in North Carolina.

It was then, according to the 1849 narrative, that an idea flashed in Brown's mind "of shutting myself up in a box and getting myself conveyed as dry goods to a free state."

Brown managed to talk a fellow church choir member, a free black man, as well as a sympathetic white shoemaker, into aiding with his passage to Philadelphia. A carpenter was enlisted to make the box - a wooden rectangle about 3-by-2-feet wide and 2.5 feet high, with three small holes for air.

On the morning of March 29, 1849, Brown - however tall or short, we do not know - folded himself into the box carrying an awl should he need more air holes and a small flask of water "should I feel getting faint," he wrote.

Brown's co-conspirators nailed the box shut, marked "This Side Up With Care," and hustled Brown off to the offices of the Adams Express Company, where the journey got off to an inauspicious start.

The box was jostled this way and that until, Brown relates, he was bumping along heels up in a wagon to the train depot. There, the crate was shoved into a baggage car, where Brown fell on his side before being pushed head down again aboard the steamer to Philadelphia.

"I felt my eyes swelling as though they would burst from their sockets, and the veins on my temples were dreadfully distended with pressure of blood upon my head," Brown wrote. "I felt a cold sweat coming over me that seemed to be warning that death was about to terminate my earthly miseries."

Luckily, a weary man threw the box down on its side, and he and his companion took a seat until the steamer stopped in Washington, D.C. There, Brown was carried on a wagon to the train depot and the box was thrown onto the ground, audibly cracking Brown's neck and knocking him "insensible," he wrote.

At last, Brown arrived in Philadelphia after a 27-hour journey, a bit battered but intact. From there he was ferried to the office of a Quaker merchant and abolitionist. After emerging from the box a free man, Brown burst into singing Psalm 40: I waited patiently for the Lord; and he inclined unto me, and heard my cry.

And so began the transformation of Henry Brown from a man oppressed by slavery into Henry "Box" Brown, a traveling entertainer who mocked popular racist ideas and pushed wildly against the boundaries that circumscribed his life as a black man.

Brown moved to Massachusetts and, with the help of abolitionists, went on tour, where he recounted his daring escape to spectators who also thrilled to it as a miracle of the modern postal delivery system. (Meanwhile, Frederick Douglass openly disapproved of the way Brown divulged his secrets, believing it would make it difficult for another enslaved person to succeed at such a plan, and history appears to have judged him correct, Cutter said.)

After the Fugitive Slave Act was passed in 1850, Brown moved to Great Britain, where he remained for several decades before moving back to the United States and then to Toronto, where he died in 1897. Across the Atlantic, Brown's act became fully his own, freed from the editing of abolitionists, such as the white evangelist who had ghost-written the 1849 narrative with Brown, according to Britt Rusert, associate professor in the Afro-American Studies department at the University of Massachusetts in Amherst.

One of Brown's first acts in Britain was to publish a new narrative in 1851 - "Written by Himself," he declared - which conveyed the same core facts of his early life in a much plainer and less preachy style.

In the beginning, he toured with a 49-scene panorama of his enslavement and escape painted on canvas panels and sang plantation melodies. A man with a knack for self-promotion, he even staged a dramatic re-enactment of his boxed journey, shipping himself from Bradford to Leeds, before he took a turn to the more fantastical, Rusert wrote in her book "Fugitive Science: Empiricism and Freedom in Early African American Culture."

Wearing brightly colored clothing, his head wrapped in a turban, and brandishing a sword, Brown strode the streets as an African prince - free as a black man to look and move as he pleased in what Cutter calls "a mockery of slavery."

As a "mesmerist," the precursor to the modern hypnotist, Brown literally took control, in one act hypnotizing a group of white English spectators into believing they were sheep while he led them around the stage, throwing cabbage their way, Cutter said. (Who, she suggests, was the animal now?)

Following Brown everywhere was the box, now his literal middle name. He burst forth from one as part of his performances and made watches and handkerchiefs appear and disappear with a mirrored box as a medium. Once a desperate last resort, it had become a tool of creativity and freedom.

And yet, as successfully as Brown attempted to push its boundaries, the box would remain a box. And Brown was still inside, in a double bind not unfamiliar to many black artists today.