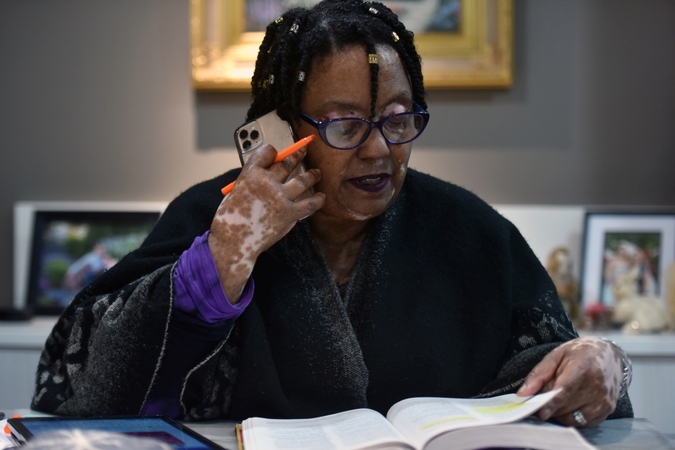 Darlene Curry and her husband run a home church where they believe they have regularly healed people through their hands-on prayer. Now, because of the coronavirus, they are praying with people via phone. Curry is shown here at home in Severn, Md., on March 28. MUST CREDIT: Washington Post photo by Marvin Joseph.

Roy and Darlene Curry say that they - like all believing Christians - have the power to miraculously heal the sick. Roy once raised a friend from the dead right at the coffin, he says. A few years ago at their house church in Severn, Maryland, the couple laid hands on the cancer-riddled body of a young woman who was soon disease-free.

These days, the Currys are praying for guidance on how to heal in the socially distant era of coronavirus.

Would they be in danger if they approached the sick to pray, placing their hand upon the ailing person's body? What about scriptures like Romans 8:2 that some interpret as saying believing Christians are free from the power of sin that leads to death? But the Bible also says to obey those in authority, say the Currys, who will socially distance as officials have ordered - unless God directly tells them otherwise.

For now, they believe healing by phone is effective. That's how they have prayed for the healing of a few people in their extended community who have the virus.

"In the spiritual realm, there is no distance or time, and I'm relying on the faithfulness of God that even though I can't physically be there, I know my prayers will pierce through all that," said Roy, 68, a retiree who travels often for mission trips centered on healings, but for now spends much of his days on phone calls praying for healing. "God guides us in all things. If he would tell us to go lay hands on someone specifically, we'd do that. God didn't say: 'Go to the hospital.' We have to make sure we are hearing from God."

There is no scientific evidence that prayers can directly combat disease. However, some studies have raised prayer as a factor in inexplicable healings, and other research notes a reduction in some people's physical pain after prayer. A national 2008 Pew Research survey found that one-third of Americans reported having experienced or witnessed a divine healing.

Unlike members of older denominations, Pentecostal and charismatic Christians believe that any Christian of faith potentially can be a prophet or a healer who has access to miracles and wondrous signs like speaking in tongues, raising people from the dead or reversing disease.

Many charismatic Christians are socially and politically conservative, and some had embraced President Donald Trump's initial dismissal of the virus as something that wasn't that serious and that the United States would easily conquer.

At the same time, to many believers, the arrival of a pandemic that has swept up the entire world certainly looks like a sign. Or at least an opportunity God can turn for the good. As the tally of victims has soared in the hundreds of thousands, those who believe that prayer can heal are turning their attention toward helping patients recover, and hoping the virus will lead to many conversions.

Chris Gore, head of healing ministries at the 12,000-person Bethel Church in Redding, California, has shifted his 700 healers from healing people at the front of the sanctuary on Saturday mornings to staffing online healing rooms that are available 9 a.m. to 5 p.m., seven days a week.

About 100 calls from around the world come in every day - many related to stress from the virus. The requests feed into a Google Doc, "which we push out to the ministers, and someone phones you," Gore said. "We're in impact mode. We're going after this thing."

In a statement, Bethel said its church community believes in God's ability to heal supernaturally, but "we also deeply value and access medical professionals."

But in mid-March, the church shared a video on its Facebook page from Kevin Dedmon, who used to teach at Bethel's School of Supernatural Ministry. In it, Dedmon said of the virus: "There is no way this thing can live in the presence of God. And we say that our declarations make a difference, that we have the antidote, we have the answer to this virus. . . . So we declare today to those that have it, those who think they'll get it, we declare no fear and we declare healing in Jesus' name."

Even as charismatic and Pentecostal ideas may still be fringe or new to many American Christians, the belief in spiritual healing - that prayers have impact - is woven through historic Christianity. The rub is in how it works. Is the Christian an equal partner with Jesus in healing? Or are they meant to accept and embrace the humbling alternative - profound prayer whose impact they can't in any way control?

Bruce Hindmarsh, an expert on Christian spiritual history at Regent College, wrote earlier this week that narratives of Christians willing to risk and give their lives in times of plague have been considered a key reason for the faith's early success.

Unlike in the past, when Christians were called to physically embrace the sick and dying, Christian activism today "means protecting the vulnerable from the deadly, silent transmission of the coronavirus," Hindmarsh wrote in a March 23 essay for his school. "It means trying to help the medical system cope with the numbers. We must be especially creative to find other ways to bring the love of Christ to the suffering and the outcast."

For many Christians who believe in faith healing, the virus presents questions that don't have simple answers. How does spiritual healing really work? Aren't they not supposed to fear death?

Caleb Brundidge, 53, lives in Los Angeles and runs a healing dance ministry that uses flags and banners - items mentioned in the Bible. He says Christians' ability to heal is as basic as "children's bread." At the same time, he notes, God gave people the ability to understand science, including how airborne disease spread. So he's staying inside for now.

"I pray for people on the phone, and there is no difference in the spirit realm," he said. "It doesn't matter if you're touching or not. It's not about me, it's about God and releasing his spirit to take control over the elements of the body and speak life into them and to the disease."

While Darlene Curry and her husband don't believe God sent the coronavirus, they absolutely believe God can make something miraculous of it. They feel they see more Americans turning to prayer and hope that means openness to God.

"This is an opportunity like we've never seen before - for God to be shown to the whole world," said Darlene, 61. How exactly that will happen, she can't say. "Our ways are not God's ways."