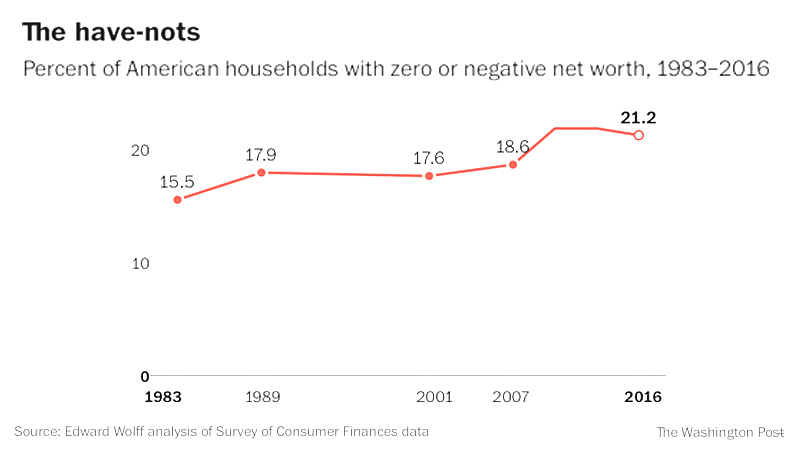 Authorities criticizing demonstrations against police brutality in the past week have often cited the need to protect property as one of the justifications for cracking down on protesters.

"Those who threaten innocent life and property will be arrested, detained, and prosecuted to the fullest extent of the law," as President Donald Trump put it Monday in a Rose Garden speech. Gov. Andrew Cuomo similarly exhorted New York City to "use the police, protect property and people" after a night of looting.

Many national commentators have struck a similar tone. Most notoriously, a headline in the Philadelphia Inquirer made a ham-handed comparison between black lives and buildings to make a case against the destruction of property.

But the people making these appeals often overlook the simple, uncomfortable fact that, for a large and growing share of Americans, "property rights" are just an abstraction: More than 1 in 5 U.S. families have no wealth to speak of. Among black families and young Americans - the core protest demographics - the share is even larger.

The graphic above charts the share of Americans with zero or negative net worth from 1983 to 2016, as measured by the federal Survey of Consumer Finances and analyzed by New York University economist Edward Wolff. "Net worth" is a measure of what you own (real estate, stocks, business equity, savings) minus what you owe (student loans, mortgages, credit cards, auto loans). When net worth is negative, it means that an individual or family's debts are greater than their assets.

Back in 1983, a little more than 15 percent of households had zero or negative net worth. As of 2016, more than 21 percent of households fall into that category, an increase of roughly one-third. Any change since then won't be known until later this year, when the 2019 survey data are released. And even that data won't illustrate the effects of shutdowns due to the coronavirus pandemic, which have cost more than 40 million Americans their jobs.

A positive net worth means safety and security. It means you can grow your wealth by investing or starting a business. It means you can make a down payment on large purchases such as homes. It means you have assets to pass on to your children when you die. It means that if you fall on hard times, you have financial reserves to draw on.

Families with zero net worth have none of those things. And families with negative net worth have to worry about paying down debts before they can even think about building a nest egg. If financial hardship strikes, they may be in serious trouble.

It's worth noting that many families with zero or negative net worth do have financial assets of some sort - savings or 401(k) retirement accounts or perhaps a house on which they have a mortgage. These assets could be liquidated, with varying degrees of difficulty, in the event of a job loss or an unexpected financial burden. But doing so would put them even more in the hole, taking value from the positive side of their ledgers and adding it to their debts.

The 21 percent figure cited above is just a national average. Among key protest demographics, the share is much higher.

Among black families, for instance, the share with zero or negative net worth is 37 percent, according to Wolff's calculations. In 2011, the Pew Research Center reported that a similar share of households headed by someone younger than 35 fell into this category.

It's difficult to make an appeal to the sanctity of property ownership when you're addressing people who don't own any property to speak of. For many younger Americans, especially nonwhite ones, the traditional American Dream of homeownership and building a nest egg to pass on to your heirs seems increasingly out of reach.

Perhaps most worrying in the Survey of Consumer Finances data is that the percentage of Americans who own nothing is increasing. Couple that trend with the explosion of wealth-hoarding at the top of society and you arrive at a very concerning picture of a society increasingly divided between haves and have-nots.

Asking the people at the bottom of such a hierarchy to respect the property rights of the those at the top is only likely to become more difficult if these trends continue.