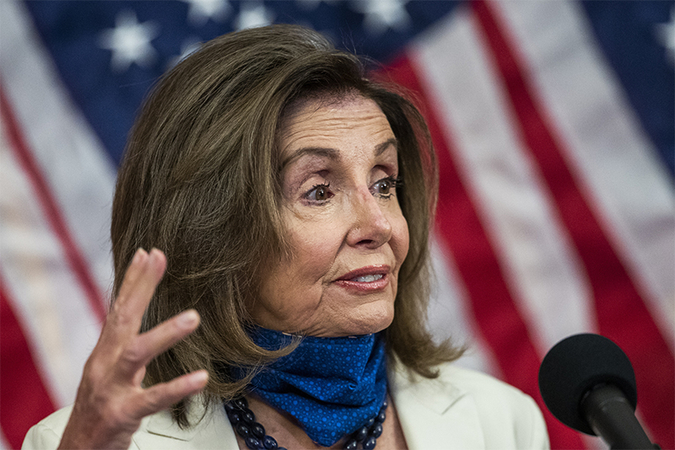 WASHINGTON - The House on Thursday passed an expansive Democratic-led measure that would revamp law enforcement practices following the public clamor for change after the death of George Floyd.

The largely party-line vote of 236 to 181 epitomized the polarized debate in recent weeks, despite public polling showing broad support for some restrictions on law enforcement after the high-profile deaths of Floyd and other African Americans at the hands of police.

With the Trump administration threatening a veto, most House Republicans lined up against the Democratic proposal and instead indicated support for a narrower proposal offered by Senate Republicans. Only three Republicans - Reps. Will Hurd of Texas, the lone black GOP House member; Brian Fitzpatrick of Pennsylvania, and Fred Upton of Michigan - broke ranks and joined Democrats in backing the House bill.

The narrower GOP proposal hit a procedural roadblock Wednesday when Senate Democrats opposed it, leaving Congress at a standstill on an issue that has dominated the public mind-set for the past month. The partisan outcome underscored the election-year struggle in Congress to find consensus despite a national crisis over race and policing that has sparked protests nationwide.

The House bill is named for Floyd, a 46-year-old black man whose killing in Minneapolis police custody last month sparked a nationwide outcry and sweeping demonstrations against systemic racism and police brutality. Three parents of victims in other cases of police violence that have drawn national attention also threw their support behind the bill Thursday.

The House legislation would ban chokeholds, establish a national database to track police misconduct and prohibit certain no-knock warrants, among other initiatives. The bill, which has more than 200 Democratic co-sponsors, contains several provisions that would make it easier to hold officers accountable for misconduct in civil and criminal court.

Many of the proposals were crafted long ago but are garnering attention now amid the nationwide protests after Floyd's death.

During the debate Thursday, Democrats argued that the measure was long overdue, with some African American lawmakers recounting their own experiences.

"We have a national problem of police brutality. . . . It requires a national solution," said Rep. Hakeem Jeffries, D-N.Y., one of the highest-ranking black lawmakers in Congress. "Here in America, every black mother and every black father has to have the talk with their child about what to do when approached by police. Any encounter can turn deadly, not because of criminal conduct but because of the color of their skin."

Jeffries said he had the talk with his two sons - and it was similar to the talk he had with his father decades ago.

"Nothing has changed," Jeffries said.

Republicans countered that federal mandates go too far. Rep. Debbie Lesko, R-Ariz., said that most police are "good, honest people trying to help our community" and that lawmakers should not "throw the baby out with the bathwater."

Rep. Glenn Grothman, R-Wis., criticized the Democratic measure. "They don't want to talk about it when white people are killed," Grothman said, later asking, "What's going to happen when we have a timid, neutered police force?"

The bill, Pelosi said, "will fundamentally transform the culture of policing to address systemic racism, curb police brutality and bring accountability to our police departments. It will save lives."

In a national Associated Press-NORC survey this month, a majority of respondents said they support changes such as requiring officers to wear body cameras and prosecuting those who use excessive force.

But President Donald Trump criticized the House bill. At a news conference Wednesday, the president accused Democrats of wanting to "weaken our police" and "take away immunity."

The bill contains several provisions that would make it easier to hold officers accountable for misconduct in civil and criminal court. One proposal long sought by civil rights advocates would change "qualified immunity," the legal doctrine that shields officers from lawsuits, by lowering the bar for plaintiffs to sue officers for alleged civil rights violations.

After Democrats blocked the Senate measure Wednesday, no signs of new talks emerged.

"It's really up to the Democrats, honestly. They have to come to the table on something," Sen. Tim Scott, R-S.C., the lead sponsor of the GOP proposal, told reporters Thursday, criticizing Democrats for blocking Republican suggestions.

With Congress set to adjourn later next week for an 18-day break, Scott expressed concern that the momentum for compromise was fading. "It's dissipating as we speak," Scott said. "And they know it. They are playing a dangerous game of politics that they can afford to wait until November or next year. That's a dangerous game."

Pelosi defended Senate Democrats for blocking Scott's bill, saying it would "defang" the bill her chamber advanced. "That isn't anything they believed in, that they could vote for. I'm very proud of them," the speaker told reporters Thursday.

The House bill has been endorsed by leading civil rights organizations, the Brady gun control group, major city mayors and more than 750 entertainment-industry artists, including Mariah Carey, Rihanna and Lizzo.

On Thursday, three people who have firsthand experience with police violence also joined the list. In a joint statement, the mothers of Tamir Rice and Eric Garner and the father of John Crawford III expressed their support for the bill.

"The unjust killing of a loved one, especially at the hands of law enforcement, is a pain too many families have been forced to endure," Samaria Rice, Gwen Carr and John Crawford Jr. said in the statement. "We are proud to support this effort because it's the right thing to do. From banning chokeholds to eliminating no-knock warrants, this bill will hold officers accountable to the communities they serve and compel them to have a guardian mentality, not a warrior mentality."

For Samaria Rice, the passage of the House bill came on the day her son would have turned 18 years old. In November 2014, 12-year-old Tamir Rice was holding a toy gun when he was fatally shot by a Cleveland police officer.

In an interview with The Washington Post, Rice said broad police reform measures have been too long in coming.

"Maybe my son will still be alive today if they would've did it," she said.

Garner died in July 2014 after being put into a chokehold by a New York City police officer. John Crawford III was fatally shot by police the following month while holding an air gun in a Walmart outside Dayton, Ohio.

As the debate over the House measure was underway, Senate Majority Leader Mitch McConnell, R-Ky., delivered a floor speech in which he excoriated Democrats for blocking Scott's bill.

"The American people know you do not really want progress on an issue if you block the Senate from taking it up," McConnell said. "They know that most police officers are brave and honorable and that most protesters are peaceful. And they know our country needs both."

Meanwhile, at the Capitol news conference Thursday morning, Bass said the passage of the House bill marked a momentous occasion for "not just the Black Caucus, but the entire Democratic caucus, as we join together to finally bring about the change the founding members of the CBC valiantly fought for."

"On May 25, 2020, our world changed," Bass said. "This time was different. This time, the video just couldn't be questioned. The slow murder of George Floyd that took place over eight minutes and 46 seconds was just not up for speculation.

The Washington Post's Seung Min Kim contributed to this report.