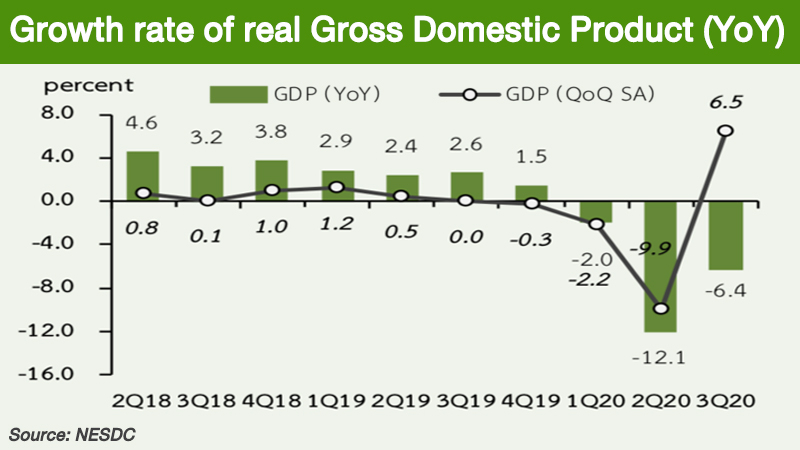 The economy shrank 6.4 per cent in the third quarter, the National Economic and Social Development Council (NESDC) said on Monday.

The gross domestic product in the third quarter however was an improvement from the 12.1 per cent contraction in the second quarter, as a result of improvements in total exports of goods and services, private investment, and private final consumption expenditure. Meanwhile, the government's final consumption expenditure, and public investment both expanded continually, the NESDC, the state-owned think-tank, said.

Agricultural production fell by 0.9 per cent, due mainly to the decline in main crops including paddy, rubber and oil palm. The non-agricultural sector declined by 6.8 per cent, improving from a fall of 12.9 per cent in the second quarter, as the government has eased measures to prevent and control the spread of Covid-19. Furthermore, economic stimulus measures also supported the recovery of manufacturing and service sectors, which fell by 5.3 per cent and 7.3 per cent, respectively, improving from falls of 14.6 per cent and 12.2 per cent in the second quarter, the NESDC said. The recovered service sector included wholesale and retail trade, accommodation and food service activities, and transportation and storage. Moreover, construction, and information and communication expanded continually.

General government final consumption expenditure increasing by 3.4 per cent, continued to expand from a rise of 1.3 per cent in the second quarter. The expansion was mainly attributed to compensation of employees, with a 1.6 per cent rise. Moreover, purchases of goods and services grew by 7.8 per cent. In addition, social transfer in kind also expanded by 8.0 per cent.

Meanwhile, construction expanded slightly by 0.3 per cent. Public investment significantly expanded by 18.5 per cent, increasing from a rise of 12.5 per cent in the second quarter. The expansion resulted from an 18.4 per cent expansion in public machinery items as well as an 18.6 per cent increase in public construction, driven mainly by government construction.