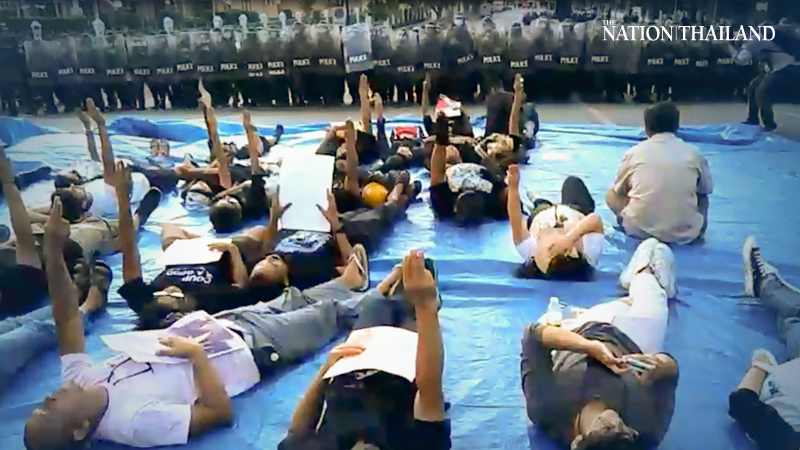 Pro-democracy Facebook page “UNME of Anarchy” announced a demonstration on Monday at the MBK Skywalk in Bangkok’s Pathumwan district.

The demonstration is in response to the police crackdown on the demonstrators’ Talu Fah Village camp on Sunday.

Also, the page announced the second demonstration in front of Government House on Tuesday.

On Sunday, crowd-control police had arrested pro-democracy protesters camped on Bangkok's Rama V Road near Government House. The protesters were charged with violating the communicable disease act and the emergency decree.

The Talu Fah Village camp had been set up on Rama V Road for demonstration since March 13 this year.

The protesters are demanding that the government release imprisoned protest leaders, amend the Constitution, abolish the lese majeste law (Section 112 of the Criminal Code), and the resignation of Prime Minister Prayut Chan-o-cha.

Deputy Metropolitan Police Bureau Commissioner Piya Tawichai told the press on Monday that all the protesters will be sent to the court for detention.

He added that the area where the Talu Fah Village had been set up was supervised by police, and traffic there can run as usual without problem.

Among the arrested protesters were six teenagers. The Central Juvenile and Family Court allowed them bail without bond.