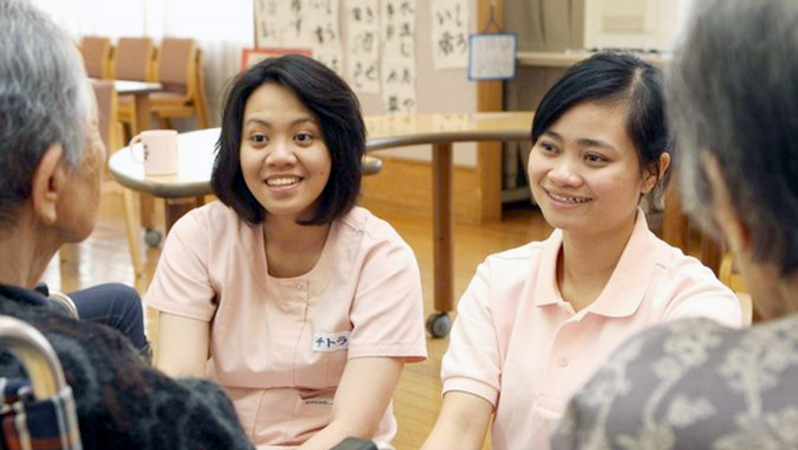 In this file photo, Indonesian caregivers Ema Yuliana, 26 ® and Citra Valentine, 25, chat with residents of Sawayakaen,a nursing care home in Hodogaya, Yokohama, on March 28, 2012. Yuliana and Valentine , who have worked under the Economic Partnership Agreement, passed the national care worker exam conducted by the Health, Labor and Welfare Ministry. (The Yomiuri Shimbun via AP Images)

In April, Japan made a significant policy shift on accepting foreign workers, including those who will perform simple labour. A decrease in the working-age population caused this change.

However, it is unclear whether or not Japan will be able to secure enough foreign workers to sustain the Japanese economy in the future.

The focus of debate over foreign workers is shifting from “Should Japan accept foreign workers?” to “Can Japan be the country of their choice?” in the global labour market.

The revised Immigration Control and Refugee Recognition Law, which came into effect in April, marked a significant turning point in Japan’s labour policy.

Foreigners will be able to work in Japan for an extended period in 14 industries, including food service, nursing care and other fields. If they reach a certain level in their language and professional skills, they will be able to obtain the newly established status of “specified skilled worker” and work for a longer period.

The Japanese government has been eager to accept highly skilled workers.

However, the recent change in the policy marks the first time that the government had introduced an official system to accept the so-called “simple labour force”.

The newly installed system is believed to have settled a longstanding dispute over the issue of whether or not Japan should accept foreign workers.

In the 1970s, the Japanese government was consistent in its negative attitude towards receiving workers who have only simple skills.

In the 1980s, however, this attitude began to change.

A growing number of companies raised their concerns by stating that a labour shortage could lead to a hollowing out of the industry and thus called for the government’s approval to allow such workers.

Japan’s working-age population, between 15 and 64 years old, has been decreasing since its peak in the late 1990s.

As of October last year, the number was 75.5 million, down 512,000 from the previous year, marking the eighth consecutive year of decline. It represented

59.7 per cent of the entire Japanese population, the lowest comparable figure since 1950.

In the meantime, the number of foreign labourers, such as “technical intern trainees” and international students, continued to increase, exceeding 1.46 million last October.

It is expected that the number of Japanese workers will continue to decrease in the future.

Encouraging women and seniors to join or return to the workforce alone will not be sufficient to make up for the labour shortage. Thus, the Japanese business community mostly welcomed the approval of the Bill.

However, the new system has not yet produced substantial results thus far.

As of last month, only 271 foreigners had acquired the status of “specified skilled worker” and were working in Japan.

The Japanese government, on the other hand, expects to accept up to 345,000 workers in the next five years until fiscal 2023.

The government believes it is necessary to accept up to 47,500 such workers in fiscal 2019 to achieve this target.

This result comes partly from a lack of preparation. For example, tests that began in April to determine the level of workers’ skills have been conducted only in a limited number of industries.

The delay in sealing agreements with Asian countries from which Japan hopes to receive human resources also inhibits the progress.

At this point, there is no guarantee that the plan to invite foreign workers to Japan will succeed in the long run.

What determines the outcome is whether or not Japan can offer attractive incentives for them to work here.

In Asia, which Japan regards as a hopeful source of human resources, the wage gap with Japan is narrowing as wages continue to rise in line with rapid economic growth.

Mr Takuya Hoshino of Dai-ichi Life Research Institute presented an index of “attractiveness” to work in Japan from an Asian perspective.

The survey compared Japan’s minimum wage with those of Vietnam, Nepal, the Philippines and China.

In 2005, the minimum wage in Japan was about 45 times higher than that in Vietnam, but the number was reduced to about 22 times last year and is estimated to be 17 times in 2023.

In relation to China, the figure is expected to decrease from about 15 times in 2005 to about three times in 2023.

In other words, Japan’s advantage over the four countries in terms of wage differentials is likely to be lost gradually.

Other Asian countries, not just Japan, are likely to face a labour shortage due to the declining population. China’s working-age population has already peaked.

The Chinese government abolished the one-child policy in 2016, but the total population may start to go down in 2025.

Already, labour shortages are occurring all over the world.

Taiwan and South Korea are ahead of Japan in receiving foreign workers.

Germany, which seeks to import human resources to care for its elderly, is also eager to invite Asian workers. There is a possibility that various countries will compete with one another to secure workers from Asia.

The top priority for the Japanese government and industry is to create conditions for becoming a country of choice for foreign workers.

The Japanese government has declared an increase in the minimum wage by about 3 per cent a year.

However, Japan’s wage level continues to be the lowest among the developed countries.

If the current situation remains unchanged, Japan will be labelled as a country in which “one cannot earn enough money”, and lose its competitiveness in the international labour market.

According to the Organisation for Economic Cooperation and Development, Japan ranked 25th out of 35 countries in a survey on the “attractiveness of countries for potential migrants” conducted for doctorate and master’s degree holders.

Overall, there appears to be room for wage increases.

Another scenario could be possible, in which the rise in wages would encourage capital investment by the companies to save on labour and improve labour productivity.

In the near term, providing a better work environment for technical intern trainees and international students may also contribute to securing the candidacy of highly skilled workers.

The debate over the acceptance of foreign workers in Japan is not yet over.

Instead, the implementation of the new system has brought to light the various problems facing the Japanese economy, which will need to be re-examined further.

• The writer is managing editor, The Japan News. This article is part of the latest series of the Asian Editors Circle, a weekly commentary by Asia News Network editors published by members of the regional media group. The ANN is an alliance of 24 news media titles across the region.