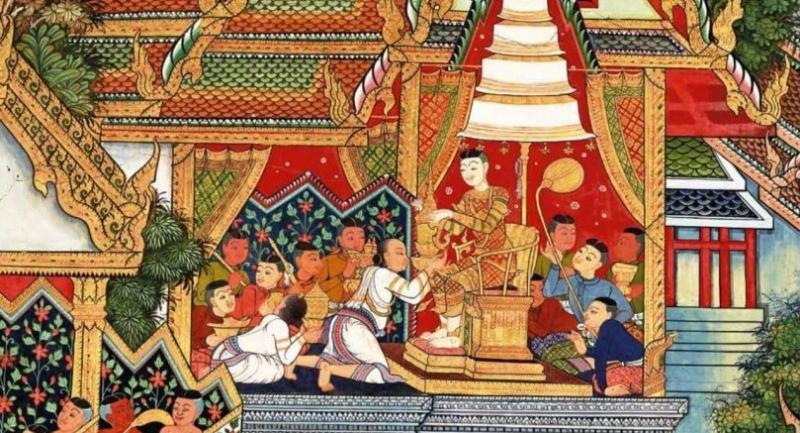 A mural in the ubosot of Wat Amphawan Chetiyaram in Samut Songkhram province depicts the chief Brahmin presenting Phra Maha Phichai Mongkut (the Great Crown of Victory) to King Rama II during the coronation ceremony.

FOLLOWING on from purification bathing and anointing rituals with consecrated water that are at the heart of His Majesty King Maha Vajiralongkorn’s coronation ceremony this Saturday, is the crowning and the investiture ceremony.

Each item of the royal regalia to be presented by the chief Brahmin during the ceremony has a symbolic significance, reflecting a practice that goes back to the 13th century during the Sukhothai Period. Nophapadon Maha Saweta Chatra (the White Nine-tiered Umbrella), the most important symbol of the supreme sovereign, is presented to King Bhumibol Adulyadej (Rama IX) on May 5, 1950.

Evidence of this lies in a stone inscription, written in Thai and Khmer found at Wat Pa Mamuang in Sukhothai province, that lists the royal regalia used in the coronation of Phra Maha Dhamma Raja I (Lithai) who ruled the Sukhothai kingdom from roughly 1347 to 1368. The chief Brahmin presents Phra Saeng Khan Chai Sri (the Sword of Victory) to King Bhumibol on his coronation day on May 5, 1950.

“The Sukhothai kingdom was related to the Khmer Empire and began adopting Hindu precepts in royal ceremonies in addition to the Buddhist concept of Dhammaraja,” says art historian Professor MR Suriyavudh Suksvasti. “Phra Chao Uthong [Somdet Phra Ramathibodi I, the first king of the Ayutthaya kingdom who ruled from 1350 to 1369] largely accepted the Khmer concept of Devaraja or the king as a divine ruler.”

When King Rama I founded the Chakri dynasty and made Bangkok the capital in 1782, his coronation ceremony held that same year was an abbreviated affair due to the uncertain situation in his kingdom. In 1783, he commissioned an assembly to re-examine the coronation records from late Ayutthaya period, resulting in a revised procedure recorded in the “Manual on the Royal Coronation Ceremony Procedure Collected from the Ayutthaya Period for Official Use”. A mural in the ubosot of Wat Amphawan Chetiyaram in Samut Songkhram province depicts the chief Brahmin presenting Phra Maha Phichai Mongkut (the Great Crown of Victory) to King Rama II during the coronation ceremony.

In conjunction with the completion pavilions in the new Grand Palace and a new set of royal regalia, King Rama I held his second coronation ceremony in 1785. This became the prototype for the rites of accession of the kings of the current Chakri Dynasty.

The first item to be presented is the Nophapadon Maha Saweta Chatra (the White Nine-tiered Umbrella), the most important symbol of supreme sovereignty. The nine layers of the tiered umbrella are made of white cloth trimmed with gold. King Rama IV ordered the tiered umbrella to be covered with white cloth instead of the previous tash cloth (silk woven with threads wrapped in gold or silver thread.) The quintet of the royal regalia

Made at the royal command of King Rama I, the multi-tiered crown symbolising the heavenly abode of the Hindu god Indra is made of gold, enamelled and studded with diamonds and other precious stones. It is 66 centimetres high and weighs 7.3 kilograms. The tip of the crown was later embellished with a large diamond that King Rama IV brought from India.

Legend has it that the blade of the Sword of Victory, which represents sovereignty and military power, was found by a fisherman in a lake in Cambodia and presented to King Rama I. He later ordered that the hilt and sheath be ornamented in gold enamel and precious gems.

Than Phra Kon (the Royal Scepter)

Symbolising legal authority and justice, the Royal Sceptre was originally made during the reign of King Rama I. The staff was crafted from Javanese Cassia wood, with a gilded trident as the finial and an iron hilt enamelled with gold.

King Rama IV ordered a new sceptre to be made of pure gold, designed to hide a sword within and a figure of a deity on its finial. However, King Rama VI brought back the original sceptre for his coronation and it has been used ever since.

Also made in the reign of King Rama I as a symbol to repel any maleficent forces that might adversely affect his subjects was the Royal Fan and Fly Whisk. Originally made from palm leaf, the rim of the fan was trimmed with gold and rod made of enamelled gold.

As an expert in the Pali language, King Rama IV later pointed out that a direct translation of the term Walawichani indicated that the fly whisk should be made with yak hair instead of a palm leaf. He later ordered that the Walawichani be adjusted accordingly. The last item is the Royal Slippers that take the form of an open-heeled slipper with the front curling up to a point. Symbolising the ruler’s majesty, King Rama I ordered a pair of gold slippers to be made according to ancient Hindu belief. This pair was made of colourful enamelled gold and inlaid with diamonds.