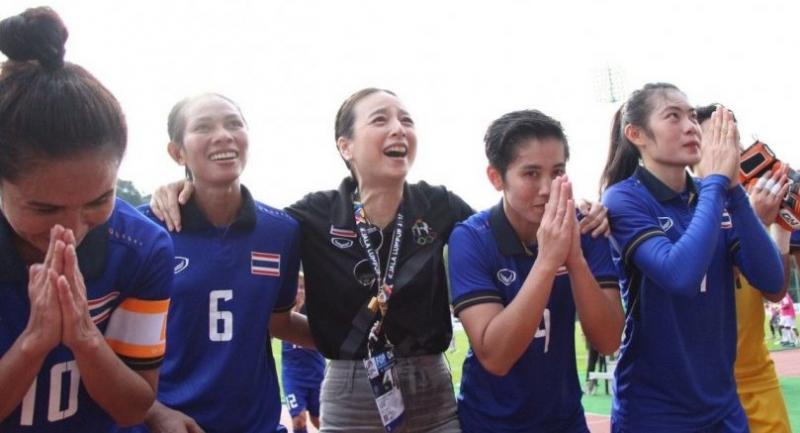 National women's team manager Nualphan Lamsam and her players thank the fans after the win versus Myanmar,

THAILAND’S football teams started their campaign in the SEA Games in contrasting fashion yesterday. The men were held to a 1-1 by Indonesia while the women’ rallied to defeat Myanmar 3-2 after trailing 1-0 at half-time.

Playing their first match in Pool B at the Shah Alam Stadium, reigning champions Thailand scored the first goal in the 14th minute when Chaiyawat Buran took full advantage of an error by the Indonesian defence in the box. However, Indonesia levelled in the 62nd minute through a penalty by Septian David Maulana. Neither team came close to scoring and the two nations settled for a draw for the second time in a month. The women’s match was a thriller with Orathai Srimanee scoring a late goal to the joy of the Kingdom’s players in the five-nation round-robin competition at the UM Arena. After trailing 1-0, Thailand went ahead with Rattikan Thongsombut scoring two goals in the 65th and 78th minutes. Myanmar struck back to make it 2-2 when Win Theingi Tun scored her first goal for her country with a brilliantly taken free-kick.

The men’s team will next play Leste Timor on Thursday while the women will take on host Malaysia on August 20.

Worrawoot Srimakka was satisfied with the result but hoped his players should have capitalised more on scoring opportunities.

"My players need more time to adjust to the condition here. They just couldn't finish the points and some players had cramps which normally never happened back in Thailand. But I'm OK with the result as it's never easy to play any team in this region.

Losing a goal can happen to any team. The defensive level is almost the same for every team in Asean but it's the offensive game that will make the difference. We will work more on finishing the scores and we have to win the next match (against Timor) and the rest of the matches. It will be tough to win all the remaining games but we will try to."

Meanwhile, the Thai Cycling Association president Decha Hemkrasri complained that hosts Malaysia have removed some events to put favourites Thailand at a disadvantage. He said the mountain bike event, in which Thai cyclists have been reigning supreme, was dropped from the competition. Also, the distance of the track has been reduced to 250 metres from the standard 333.33 metres set by the International Cycling Federation.

In time trial, Malaysia reduced the distance from 100km to 50km to favour their athletes, Decha alleged. The cycling chief, however, hoped that Thai athletes would overcome all the hurdles put up by the hosts and come on top.

The Table Tennis Association of Thailand has high hopes on Suthasini Sawettabut, who will defend her women’s singles gold medal. Thai table tennis chief Piradej Pruttipruk expected the ace player to reach the final where she is likely to meet 2008 Olympic Games bronze medallist Feng Tianwei of Singapore.