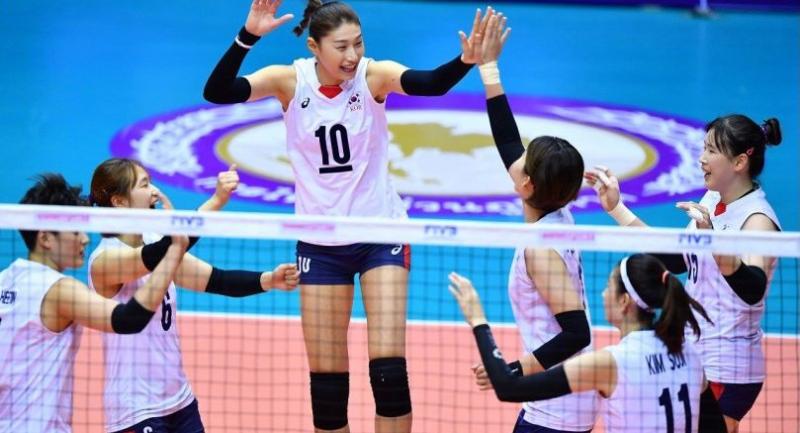 Nakhon Pathom- Kim Yeonkoung’s  double-digit output led Korea to a comfortable straight-set 25-21 25-13 25-16 win over Vietnam and moved the world No.10 to a step closer to securing their place at the FIVB Volleyball Women’s World Championship Japan 2018 Asian Qualifiers at the Nakhon Pathom Gymnasium on Saturday.

Korea and Vietnam started an intense duel from the very beginning of the first set, which saw the on-going game in the deadlock at 6-6. Shortly after that, the Koreans proved their class. With Kim Yeonkoung stepping up on offence to fire fierce attacks, Korea advanced 10-6.

The second set became a totally one-sided battle when the Koreans asserted their dominance on offence. Even though Vietnam gave the Koreans a gallant fight towards the end, the latter still finished the set with ease 25-13.

The third set was initially dominated by Korea. Kim Yeonkoung aggressive attacks and serves gave the Koreans the momentum in the set, which they led commandingly 17-6. Vietnam tried their utmost to hit back and their more determination paid off impressively as they saved five match points before Korea eventually captured the set 25-16. After the match, Korea head coach Hong Sungjin said, “At the Asian Championship in Philippines last month, we struggled to beat Vietnam 3-1 and so, we trained much harder here and played them easier this time. I think our receiving is improving, while our blocks and attacks remain our strong points. In our last match against hosts Thailand, we will try to do our best, but young players will also be sent on court to gain experience.”

Kim Suji, who scored 8 points for Korea, added, “Vietnam played well at the beginning and that put our team in trouble. However, after we started to learn their tactics, we improved our game and won the match. I think Kim Yeonkoung is a good captain as she guided us to victory in several matches, but young players are also important for Korea’s future. Young Koreans have learned from Kim Yeonkoung and our team then started to get better and better without her in the team. At the World Grand Champions Cup in Japan, we played without Kim Yeonkoung but we came up with better performance. So, I think anyone in the team can replace Kim Yeonkoung when she retires.”

With the straight-set win, Korea moved a step closer to clinching one of the two World Championship slots up for grabs in Pool B. They collected 9 points to stay unbeaten in the single round-robin tournament. The Koreans will next take on hosts Thailand, the team they lost in straight sets at the last month’s Asian Senior Women’s Championship in Philippines, in their last match in Nakhon Pathom on Sunday.

Vietnam have yet won a set in the five-day meet to score no point from straight three losses. They are due to next take on Iran in their impossibility of winning the Japan Finals ticket