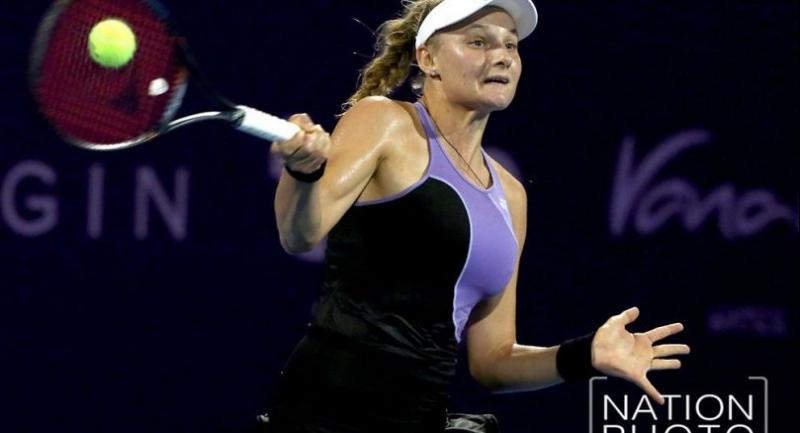 HUA HIN - FOR THE past several days, young Ukrainian Dayana Yastremska has astonished fans at the WTA Thailand Open with explosive groundstrokes that sent opponent after opponent packing from the True Arena.

Unlike many other big-hitters on the tour, this 18-year-old from Odessa can whip winners from both wings at will, with solid technique and great timing that makes her a coming force in women’s tennis.

The talented teenager had only been a pro for two years when she won her maiden title in Hong Kong last October, upsetting top Chinese players Zhang Shuai and Wang Qiang, along the way. But before that she sent a signal by becoming the first woman born in the 2000s to crack the top world 100, reaching the milestone last July following impressive results on the ITF circuit. Though she grew up idolising Roger Federer, Yastremska was eager to learn from multi-Grand Slam champion Serena Williams, the queen of the power-game, when they met in the Australian Open third round last month.

“I wouldn’t say Serena Williams is my idol but she is a legend. I played her [and lost in the Australian Open] and I still have a lot of things to learn,” said the young star, who trains in Ukraine and Belgium, with former world No 1 Justine Henin as her adviser.

“However, you were born original so you have to be original. So I’m trying to be myself instead of trying to be like my idol,” added Yastremska, who dazzled the Hua Hin crowd with bullet shots that sent two-time Grand Slam winner Garbine Muguruza of Spain out of the tournament. And that was no fluke; she previously outgunned the former world No 1 in Luxembourg last year.

“Ever since I was young, I have hit the ball hard because I’m strong,” she laughed. “That’s my style and that’s something I’m improving in myself. I can play with variety as well but I feel good with the aggressive game,” added the world No 47, the youngest in the top 50 at 18 years and seven months.

In modern tennis, the power game is inarguably key to success at the very top. Serena Williams, Maria Sharapova, Muguruza and Jelena Ostapenko all rely on their big weapons to win Majors. The newly crowned Australian Open champion Naomi Osaka, who bagged the US Open title before Melbourne, adds more evidence that to dominate women’s tennis you need “big guns”.

“Osaka is powerful, but she is also clever. She can be aggressive but at the same time very calm. I can see many qualities in her,” Yastremska said of the current world No 1. “ So if you feel good with an aggressive game you have to keep doing that. But not everybody can do that as it depends on their style.”

A tech-savvy youngster, the teenage sensation surprised everyone at the True Arena by stopping to pay her respects at the local spirit house every day. No matter how fast the pace of the world today, young Yastremska still believes that science can’t explain everything.

“I saw people pay their respects to it and I felt I should do the same too. I believe there’s a power in that,” she said.

Yastremska was into her second WTA final and playing Australian Ajla Tomljanovic in Hua Hin yesterday. A see-saw clash saw Tomljanovic level at one set all to force a tiebreak before Yastremska triumphed 2-6 6-2 6-4 (7-3) to lift the trophy and guarantee a career best top 40 place. But it’s obvious she has the potential to much further – at least top five, according to former world No 9 Paradorn Srichaphan. She is in no rush to become the best, however.